When Microsoft unveiled the Windows 10 Fall Creators Update earlier this year, one of the features the company highlighted was a tool called Timeline that shows thumbnail icons of things you were doing in the past… either on your PC or on another device.

The idea is to provide a sort of task switcher that doesn’t just let you flip between running apps… it lets you flip back to that web site, document, or game you were using earlier today, yesterday, or last week… whether it was on your Android phone or your Windows PC.

Timeline wasn’t ready to go when the Fall Creators Update started rolling out this fall. But now it’s rolling out with the Windows 10 Insider Preview Build 17063, which means beta tester can now give it a try. 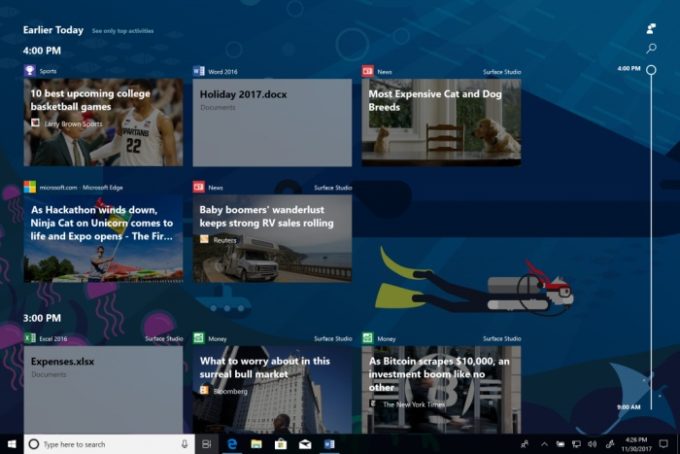 The point of bringing features like this first to Insiders is to let them kick the tires and provide feedback. If you’re running a stable version of Windows 10 it might be weeks or months before you get Timeline. But here’s how it’ll probably work when you do get it:

Microsoft calls the items that show up in Timeline “activities” rather than apps, since they’re actually a combination of an app and what you were doing with it. For example, an activity could include editing a specific Word document or Excel spreadsheet, listening to a playlist in a music app, or viewing a specific web page.

App developers can also optimize their apps for Timeline to make the thumbnails provide appropriate context. Microsoft says the preview of Timeline works with its own Office, Edge, OneNote, Maps, News, Money, Sports, and Weather apps.

Cortana can also tap into your activity history to recommend activities you might want to resume when you’re doing things like switching from an Android or iOS device to your Windows laptop or desktop.

Oh, and if you do want to use Timeline’s cross-device capabilities, you’re going to need to be logged into the same Microsoft account on multiple PCs and/or install the Cortana app on your iPhone or Android device.

Windows 10 Insider Preview Build 17063 also includes some Microsoft Edge updates, Cortana improvements, and some settings and design changes, among other things. Windows Subsystem for Linux processes such as sshd can also now run in the background. The list is actually pretty long, so go check out the Windows Blog for more details.

Some users will also get the first preview version of Sets, which allows you to group a bunch of different apps together in the same window as if they were tabs in a web browser. But Microsoft says it’s doing a controlled study of Sets for now, which means not all Windows Insiders will get access right away.