Qualcomm says these new “Always Connected PCs” will be able to run the full Windows experience, but they’ll take advantage of smartphone-like features including lower power consumption which enables long battery life and slim designs as well as always-connected features so that you’re never really offline. 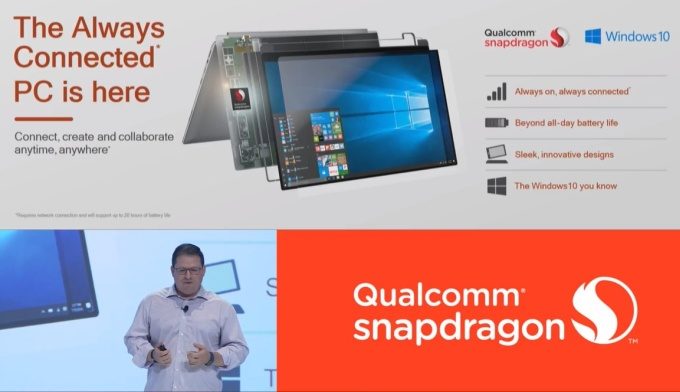 Microsoft and Qualcomm announced they were working together to bring Windows 10 to devices with Snapdragon chips earlier this year. We already knew that the companies were promising that you’d be able to run legacy Windows applications at “near native” speeds, but it wasn’t entirely clear what advantages Windows on ARM would have at a time when Intel offers low-power (and low-cost) Celeron and Pentium chips for portable computers.

Now Qualcomm is starting to make its case for Snapdragon-powered PCs. Some models are expected to offer up to 20 hours of battery life and even longer standby time. Like a smartphone, they’ll never really go completely into sleep mode. Press the power button and the screen will instantly turn on. And they’ll have Qualcomm’s integrated X16 LTE modem to keep you online whether you’re at home or on the go. 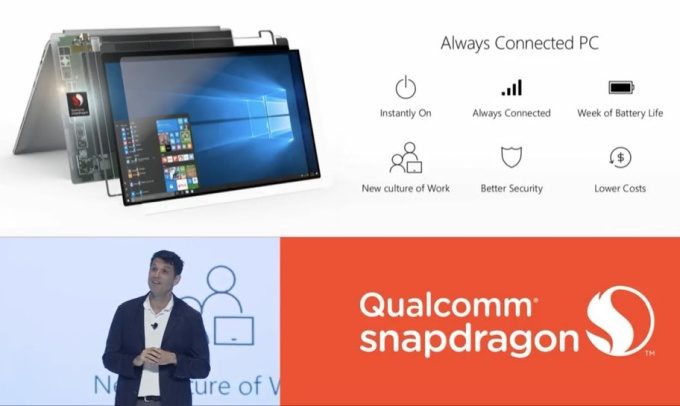 That last bit will probably require a data plan, which could drive up the cost of ownership. And it’s not like you can’t find Intel or AMD-powered laptops with LTE modems. But packaging the CPU, graphics, and modem into a single chip likely means better efficiency.

Like other Windows 10 PCs, Always Connected devices will support features including Windows Hello for secure logins and Windows Ink for pen input.

One thing to keep in mind: while Qualcomm’s chips are more energy efficient than most of Intel’s processors, they’re not necessarily cheaper. Qualcomm and Microsoft are marketing this new class of ARM-powered PCs as “Always Connected,” not “cheap.” The starting price for the upcoming Asus NovaGo convertible laptop with a Snapdragon 835 processor, for example, is expected to be $599.

That price might seem high at a time when you can find Intel-powered laptops that sell for less than $200. But it’s actually about what you’d pay for a decent smartphone… and we’re talking about a laptop with the same processor as a decent smartphone plus a much bigger display, a full-sized keyboard, and the ability to run a desktop operating system.