Magic Leap has been promising to deliver an advanced augmented reality system for years, and now the company is finally giving us a look at the Magic Leap One headset, along with a promise that it’ll ship a “Creator Edition” of the headset for developers in 2018.

The company has raised nearly $2 billion from investors so far, but Magic Leap has been fairly secretive about its hardware… until now. 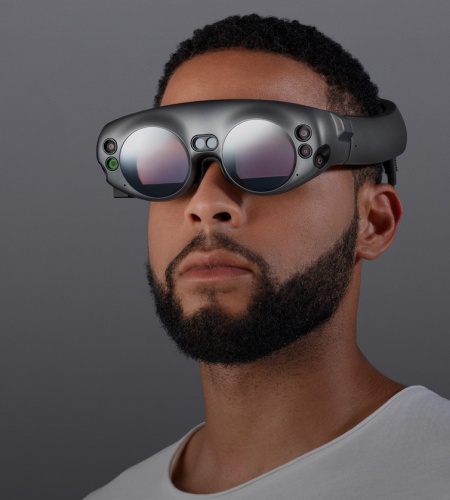 Here’s what we know: it includes a pair of glasses with a semi-transparent display, a whole bunch of cameras and sensors, and a wireless motion controller with a built-in touch surface.

The system also includes a “Lightpack” computer that you can clip to a belt or pants pocket. By offloading the processing power to the Lightpack, Magic Leap has made a headset that looks like it’d be a lot more comfortable to wear than most existing virtual reality headsets.

Oh, and if you’re wondering how you’d wear this headset over a normal pair of glasses, you wouldn’t. Magic Leap plans to develop a version that works with prescription lenses, so the headset would replace your glasses when you’re wearing them.

If the Magic Leap one delivers on its promise, it’ll allow you to see virtual objects superimposed on real-life settings in a realistic way. It’s the sort of technology we’re starting to see on phones, but instead of popping Star Wars and Stranger Things characters onto your phone’s 5.5 inch display, Magic Leap One will put them in your normal field of view, allowing you to interact with them almost as if they were really in the same room.

Thanks to room mapping technology, objects will also stay where they’re placed, allowing you to decorate your room with virtual items and return to them later.

Magic Leap says the headset also includes a “soundfield audio” system that provides a 3D-like experience that goes beyond stereo sound by conveying distance and other details through subtle changes in the sound.

There’s still no word on how much the Magic Leap One Creators Edition will cost, but Magic Leap says it’ll begin offering a software development kit in “early 2018,” with the headsets set to ship to developers sometime in 2018. It’s not clear at this point when the company plans to ship a consumer version of the augmented reality system.