Budget Android phones are a lot better than they used to be, and you don’t have to spend a ton of money to get a phone with a decent display, processor, and other features.

But there are still some entry-level phones that ship with 1GB of RAM, limited storage space, and hardware that can affect performance. Earlier this year Google announced it was working on a version of Android specifically designed to offer improved performance on those phones. It launches tomorrow.

Google says Android Oreo (Go Edition) is designed to ship on devices with just 512MB to 1GB of RAM. 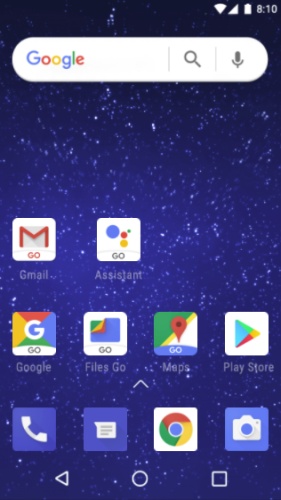 Google says Android Go includes performance enhancements to the operating system, a new set of light-weight Google apps, and a version of the Google Play Store that lets users download any app, but which highlights those that will work best on hardware running Android Go.

Phones that have 1GB of memory or less also tend to have relatively pokey processors and small amounts of storage. So Google didn’t just stop at tweaking memory usage. The company says it’s doubled the amount of available storage space by shrinking the size of its software.

There are optimized versions of Google Maps, Gmail, Google Play, Chrome, and Assistant, among others. The new Google Go app, for example, is basically a version of the Google app available on other phones, but it weighs in at just 5MB and consumes up to 40 percent less data.

Google is also introducing a new Files Go app designed to help users find files, back up files to the cloud, share them with other nearby phones, or free up disk space.

Data Saver is also enabled by default. This optional feature compresses data before its sent to your phone and allows you to choose which apps can use background data.

Google says some of the first phones to ship with Android Oreo (GO Edition) will ship in early 2018.