Smartphone users are used to the idea of a one-stop-shop for apps. If you have an iPhone, you get all of your apps from the App Store (unless you have a jailbroken device). Android is a bit more of an open platform, but the Google Play Store is still the best place to find most apps, especially if you want automatic updates, security scans, and other features.

Microsoft has been trying to offer something similar for Windows users since the launch of Windows 8. But as much as the company would like developers to bring their applications to the Microsoft Store, there are some restrictions that keep some of the most popular software from showing up there.

For example, Microsoft doesn’t allow developers to distribute web browsers in the store unless they use the same rendering engine as Microsoft’s Edge browser. But Google has found a sort of workaround, because there’s now a Google Chrome Installer app in the Microsoft Store.

Update: It looks like Microsoft noticed… and removed the “app.” 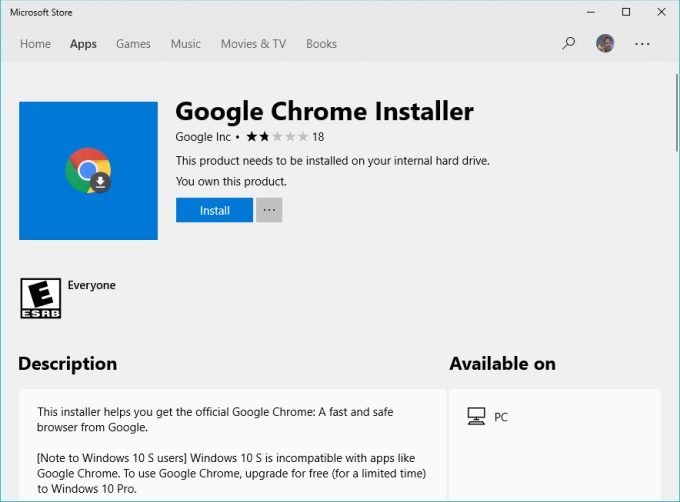 When I say installer, that’s what I mean. You can’t actually install the Chrome web browser from the Windows Store. What you can install is an app that lets you download and install Chrome.

It’s kind of a ridiculous workaround and it’s not clear to me that this is any easier than visiting https://www.google.com/chrome/ in a web browser and clicking the download button.

In fact, that’s kind of all this app does. Once installed, you can run the Google Chrome installer and it just opens a web page with a “Download Chrome” link, so “installing” this app is really an extra step, not a time-saving trick.

But it does mean that if you open the Microsoft Store on a Windows computer and search for Google Chrome, you’ll find an option. I mean, it’s not the first result that pops up, but it’s there. That’s more than you get if you search for Mozilla Firefox at the moment.