The Eve V is a Windows tablet with a high-resolution display, a detachable keyboard, an active pen, and a starting price of $799. I was pretty impressed with the review unit Eve sent me earlier this month, and now that Eve Tech is shipping the first Eve V tablets to backers of its crowdfunding campaign, the Finnish company is ready to take orders for a second batch.

Eve is running a flash sale starting this morning at 9:00AM Eastern (2:00PM GMT), with a limited quantity of tablets available for purchase. 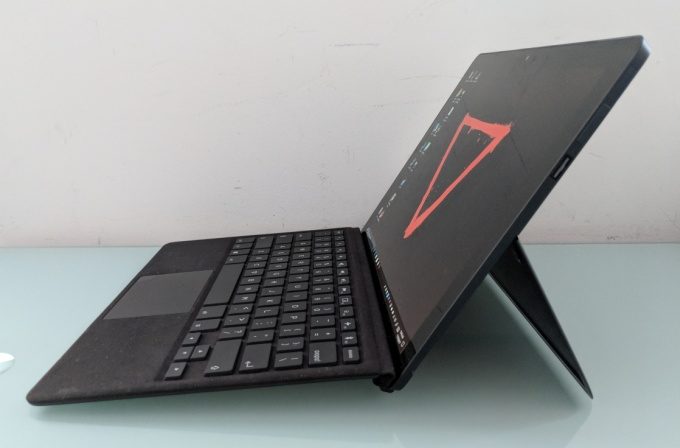 There are dual microphones and quad speakers, and the tablet has front and rear cameras, although they’re not very good (the Eve V was a “crowd-developed” tablet, and the community voted that the tablet should have cameras, but that they didn’t need to be all that impressive).

The keyboard cover is covered with Alcantara fabric and features backlit keys with RGB lighting for 7 different color options. And the pen supports 1024 levels of pressure sensitivity and magnetically attaches to the side of the tablet when its not in use.

That’s the same starting price as Microsoft’s entry-level Surface Pro tablet, but at that price you get twice as much RAM with the Eve tablet… and a keyboard and pen. Both of those are sold separately if you buy the most affordable Surface Pro.

You also get a few extra perks with the Eve V, including its fingerprint sensor and a Bluetooth keyboard that can be used whether it’s attached to the tablet or not. But there’s no option for an official keyboard without a fabric coating, so beware of dust getting caught in the keyboard cover and good luck cleaning up stains.

It’s a bit tougher to compare higher-priced models. Eve’s tablets do tend to be cheaper when you compare the memory and storage, but since all Eve tablets feature Intel Y-series processors rather than the more powerful U-series chips that come with higher-priced Surface Pro tablets, you’re trading off some performance for lower price tag and reduced power consumption.

I’d say the $799 and $1199 models of the Eve V probably offer the most bang for your buck, but I suppose it’s nice to have the higher-priced options if you need more RAM or storage: Even offers models with up to 1TB of disk space.