Intel’s integrated graphics technology has come a long way in recent years, allowing you to watch 4K videos, connect multiple displays, or even play many games on a PC without discrete graphics.

But the company says that it’s aware many customers in search of a higher-performance laptop were opting for models with Intel Core H-series quad-core chips paired with discrete graphics from AMD or Intel.

Now Intel has announced a new solution that’s coming soon: an 8th-gen Intel Core H-series chip with AMD Radeon graphics baked in. They should hit the streets in the first quarter of 2018. 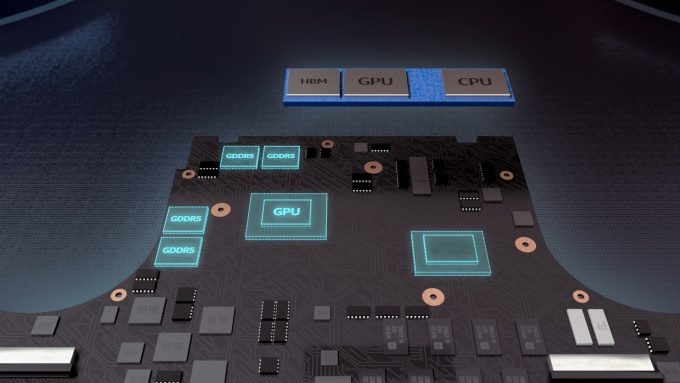 Intel still refers to the Radeon graphics as “discrete,” but it’ll be part of the same processor package as the CPU. The upshot is that laptop makers will be able to offer more compact notebooks, convertibles, and mini desktops since cramming the Intel and AMD components into a single package reduces the power consumption and space requirements.

The new chip will feature a “semi-custom” graphics processor from AMD that Intel and AMD says will offer discrete graphics-level performance for playing games, editing photos or videos, and other tasks that can leverage modern GPU technologies.

There’s a new Embedded Multi-Die Interconnect Bridge (EMIB) deigned to let the Intel and AMD components work together, and Intel says the solution include new software drivers and interfaces. Intel says the new chips will also be the first mobile processors to use High Bandwith Memory 2 (HBM2).

We’ll probably find out more about the upcoming Intel + AMD solution and learn about some of the first computers to ship with the solution at the Consumer Electronics Show in January, if not sooner.

Rumors about an Intel + AMD Radeon chip have been circulating for a while, but at this point we’ve definitely moved past the rumor stage.

While Intel and AMD have generally been seen as rivals over the years, the competition between the two companies has generally been a good thing for consumers, which is why AMD’s launch of its Ryzen processors this year has been so exciting. For the past few years AMD has had a competitive edge over Intel when it comes to graphics, but the company’s CPU solutions have lagged behind Intel’s in terms of performance. But AMD’s Ryzen chips are pretty competitive with their Intel 7th and 8th-gen Core processor counterparts.

But AMD has long been willing to work with partners on semi-custom chips like the ones found in Xbox and PlayStation game consoles. In some ways, the partnership with Intel is an extension of that… and in this case, it’s a move that could help both companies take on another rival: NVIDIA, which currently dominates the discrete graphics space.

By working together on a solution that could offer streamlined, thin-and-light computers with high-performance CPU and graphics performance, it’s possible the two companies could eat into NVIDIA’s market share.

With Microsoft and Qualcomm working together to bring Windows 10 support to PCs with Snapdragon 835 processors (and possibly other ARM-based chips in the future), Intel and AMD are also likely to face increased competition in the low-power PC space. Working together could give both companies a competitive advantage… at least for high-end, high-performance mobile PCs.