Remember when tablets were exciting? The amount of hype that surrounding the launch of the original iPad and the first crop of Android tablets has died down in recent years (as has the average selling price of a tablet), and now research firm IDC reports that tablet shipments are down… for the 12th consecutive quarter.

In other words, the overall number of tablets shipped around the world has fallen during every single 3-month period in the last 3 years… according to IDC at least. 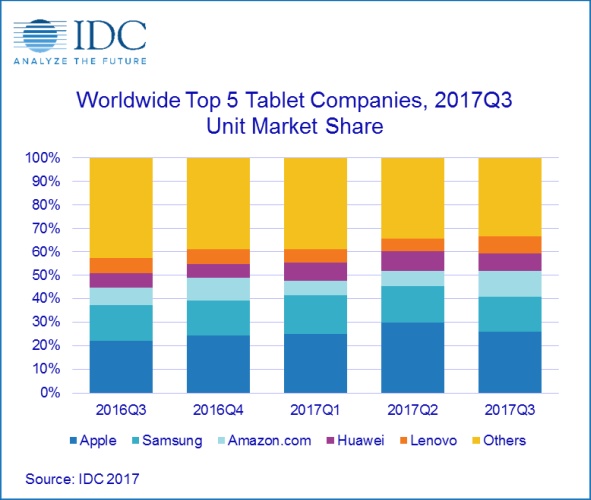 That said, there are a handful of individual companies that actually saw growth in tablet shipments in the most recent quarter.

In other words, companies that didn’t make the top 5 saw an overall decline, which means that while 40 million tablets shipped in the quarter, that number is down 5.4 percent from the 42.3 million that shipped a year earlier.

I suspect the same trends we’ve been seeing for a while account for the decline. The first tablets were basically phones with big screens and batteries (but no cellular connectivity). But in recent years phone screens have gotten bigger, some models have longer battery life, and generally speaking folks who might have been drawn to tablets for their screen size might not feel the need for a separate device anymore.

And just because shipments are down doesn’t necessarily mean people aren’t using tablets. They just may not feel the need to upgrade or replace them very often. If you think of a tablet as a secondary or tertiary device that complements a phone and/or PC, it’s probably the device you’ll upgrade the least frequently since older models are still good enough for basic use like web browsing, media consumption, and light gaming.

It’s interesting to look at the companies that are continuing to see growth. Amazon is now number 3 on IDC’s list. The company has pretty much given up on high-end tablets, instead focusing on low-cost devices with decent, but not spectacular hardware. With prices starting as low as $50, Amazon’s Fire tablets are almost a no-brainer for folks looking for an inexpensive device for reading Kindle eBooks, streaming music and movies from Amazon, and surfing the web, playing games, and generally anything else you can do on an Android tablet that’s tightly tied to Amazon’s ecosystem.

Apple, meanwhile, has taken a two-pronged strategy. It’s one of the few companies that’s still offering high-end tablets that ship with a mobile operating system. But Apple’s entry-level iPad and iPad mini tablets are also some of the company’s most affordable products. Sure, with prices starting at $329, they’re expensive compared to Amazon’s Fire tablets, but by Apple standards they’re pretty affordable entry points into the company’s ecosystem.

15 replies on “IDC: Tablet shipments have declined for 3 years straight”