Apple spent years developing the Face ID system used in the iPhone X, essentially shrinking the technology found in the Xbox Kinect (which measures 9.8″ x 2.6″ x 2.6″) so that it fits in the notch at the top of Apple’s $1000 smartphone.

But Apple isn’t the only company to develop technology that creates a 3D map of your face that you can use to securely login to your device… or control cartoon-like figures with you facial movements.

Rival Huawei is developing its own answer to Apple’s Face ID, and while it’s not ready to go just yet, Huawei did provide a sneak peek at the event where the company unveiled the new Honor V10 smartphone today. 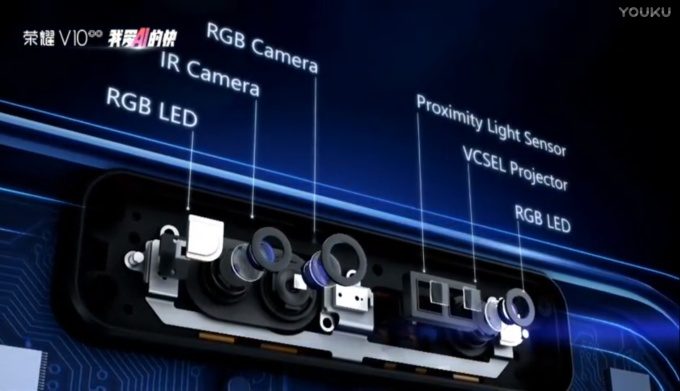 While Face ID basically does two things so far: enable secure logins and animate Animoji, the technology could theoretically be used for much more (and it probably will, in time).

For example, Huawei showed a prototype of its system being used to scan a toy in real time, creating a digital 3D replica of that toy which you could manipulate on the phone, send to a 3D printer, or perhaps use for other purposes (like home decorating or other things that Google’s Tango technology could be used for).

Huawei says the new system will let you securely unlock a phone in 400ms, which is a little slower than the fingerprint sensors Huawei currently uses. But it could allow Huawei to offer an Apple-like face login system in the future that’s far more accurate than the face unlock feature currently used on some Android phones, which relies on a single front-facing camera rather than a complex set of imaging tools that includes a projector, infrared camera, and RGB LEDs and cameras.

Oh, and as for Huawei’s Animoji clone? It seems to work a lot like Apple’s, but Huawei showed off a demo featuring an animated panda bear that has a lot more detail than Apple’s simple cartoon characters. On the one hand, the effect is a bit more impressive. But I’m not sure it’s quite as compelling: part of the appeal of Apple’s Animoji is their simple design… I think.