Google’s Pixel smartphones have some of the best cameras available on any phone. The 2016 model was one of the best available at the time… and the 2017 model is said to have an even better camera.

If you use those cameras to snap a lot of photos, Google also offers a bonus feature: if you use Google Photos to backup pictures taken on your phone, Pixel users get to store an unlimited number of photos at original quality. Anyone using a different phone only gets unlimited storage if they opt for “high quality,” photo storage, which means saved pictures are compressed.

But while the Pixel 2 has a better camera then the first-gen model, it also has something that last year’s phone did not: a limit on that “unlimited” storage. 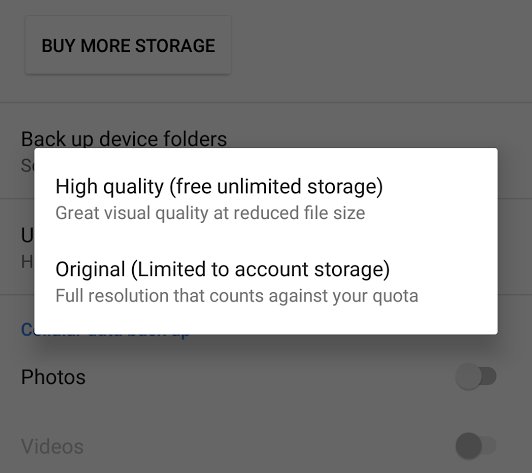 Google says it’ll let Pixel 2 and Pixel 2 XL users upload an unlimited number of original-quality photos and videos through the end of 2020 (check the fine print). Google won’t delete those files on January 1st, 2021… but the company will probably either start counting original quality photos against your cloud storage limits at that point or encourage you to switch to high quality.

The company didn’t announce any time limits when it launched the original Pixel. And it turns out, there still aren’t any: Google confirmed to Android Police that there are no plans to cut off original Pixel owners at any point.

Of course, I suspect most folks who spent money on a bleeding edge phone like the Pixel in 2016 don’t really expect to still be using the same phone in 2019 or 2020… but it’s nice to know that if you do have the phone, you still get to keep uploading original-quality images.

That said, I’ve been making use of the “high quality” option on my Nexus 5X for the past year, and I can’t really see any difference between original quality and high quality. Folks with more discerning tastes may notice subtle differences though.

15 replies on “If you take a lot of photos, the original Pixel has a perk the Pixel 2 does not”