Nintendo’s SNES Classic Edition is an $80 game console that looks like a tiny version of the company’s 1990 game console, and which comes with 20 classic games pre-installed.

Like last year’s NES Classic, the latest retro game system from Nintendo doesn’t officially support any other games. It doesn’t take cartridges, and you’re not supposed to be able to load any ROMs.

But unofficially… you can. 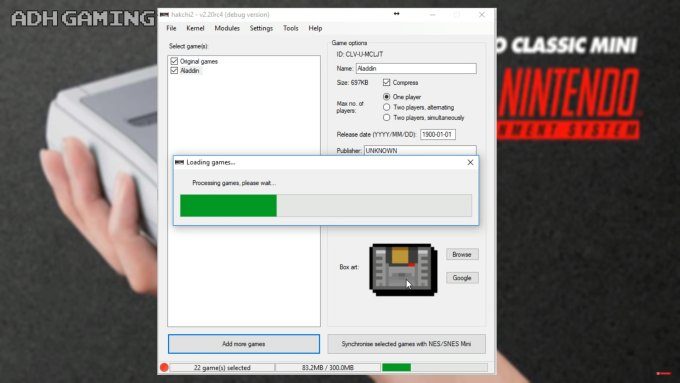 Earlier this year a tool called hakchi2 was released, making it (relatively) easy for users to add games and features to the NES Classic.

Now hakchi2 v2.20 has been released, adding support for the SNES Classic. It automatically converts games to a format that can be played on the SNES Classic (with about 75 percent of games said to be working properly), and allows you to set different profiles if you have both an NEW Classic and an SNES Classic.

The tool also lets you compress game files using 7-Zip compression so you can fit more games on a console at once. And if you encounter a game that doesn’t work right away, you can try to use RetroArch emulation instead of the default Nintendo emulator. RetroArch also lets you play NES games on the mini SNES.

Nintendo just started shipping the SNES Classic a few weeks ago, and it’s already a popular item that’s hard to find in stores. If you managed to get your hands on one, hakchi2 could help make the micro-console a bit more versatile… although you’ll probably void your warranty if you hack the device, so proceed with caution.

One of the reasons the developer of hakchi2 was able to update the tool so quickly is that the SNES Classic is said to have hardware that’s very similar to that found in the NES Classic.

There’s no word on if or when Nintendo will launch another classic edition console: while the next obvious step would be the Nintendo 64, that system had a much more complex processor which is harder to emulate. So some folks are speculating that the next system is more likely to be some sort of GameBoy emulator. Of course, there are no shortage of GameBoy emulators for smartphones, which makes me wonder if a retro handheld console would be as popular as Nintendo’s classic edition boxes designed for your TV.