Want to play some classic console video games, but having a hard time getting your hands on an SNES Classic? There’s no shortage of ways to emulate classic game systems on a PC. You can even turn a $35 Raspberry Pi into a game emulation system with free software like RetroPie.

But actually obtaining games to play in those emulators is a bit trickier: the easiest way is to download ROMs from the internet, but that’s not exactly legal.

And that’s what makes the Seedi retro game system different from many other solutions. This compact game system isn’t much bigger than a USB CD drive… and it has a CD/DVD drive that you can use to play original PlayStation1, Sega CD, or TurboGrafxCD games, among others. No downloaded ROMs required. 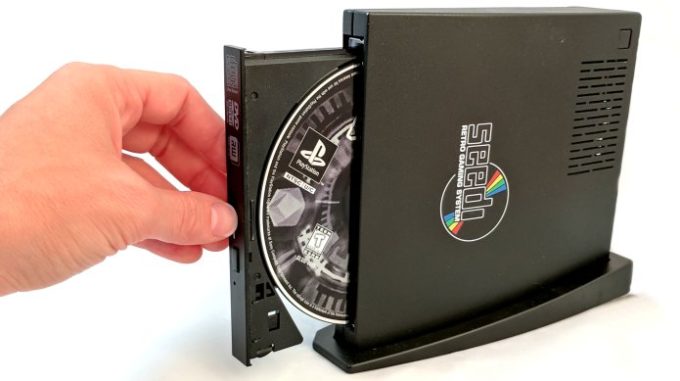 Of course, you can still download ROMs. The system supports NES, Genesis, Game Boy, and Atari games, among others. It also supports DOS games. But I kind of like the idea of a system that lets you pull old games you already own out of the box and give them new life.

If you purchase a Retrode adapter separately, you can even play classic Sega Genesis or Game Boy cartridges.

The Seedi system is expected to ship in March, 2018 if the developers raise $50,000 through a crowdfunding campaign on Indiegogo. But they’ve already got working prototypes and there are some third-party, hands-on previews showing that the Seedi basically does what it’s supposed to: function as a small retro game system that can support CDs as well as ROMs.

A Seedi game system plus a wireless controller will set you back $125, or you can save some money by pledging $110 for a model with no controller. You should be able to use just about any USB or Bluetooth game controller with the system.

The system supports WiFi and Bluetooth, has an HDMI port for 720p or 1080p output, and works as a CD or DVD player and/or Kodi media center as well as a game system.

The whole thing is powered by a 1.2 GHz Allwinner H3 quad-core ARM processor with Mali 400 graphics, 512MB of RAM, and a 32GB SD card. As CNX-Software notes, it looks like the Seedi is built around an orange Pi Lite Board. So if you’d prefer to build your own system, you can just order one of those from AliExpress for $12. But you’ll still need to add storage, build a custom case, hook up a disc drive, and configure the software.