The Google Pixel 2 and Pixel 2 XL have some of the best smartphone cameras around… but that’s due as much to Google’s software as its hardware. You can shoot portrait photos with blurred backgrounds thanks to a software algorithm. Image stabilization is achieved with a combination of optical and digital technology.

Now the makers of the Rylo camera are applying a similar strategy to their portable camera. The Rylo shoots 360 degree 4K video at 30 frames per second, or it can capture 6K panoramic photos.

But it’s the software that really makes this $500 camera special. 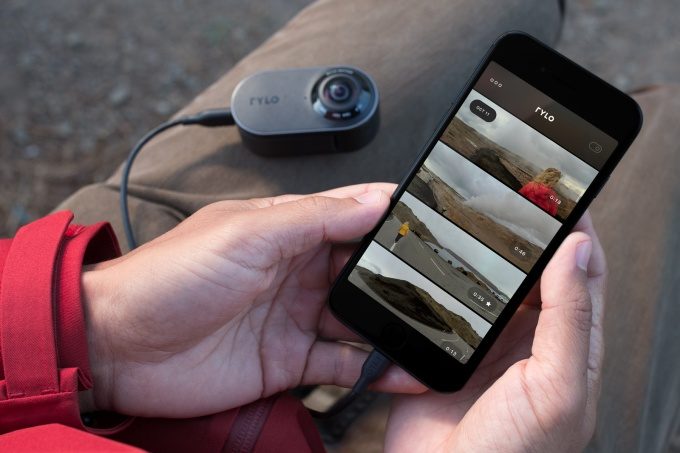 Rylo was developed by two of the co-founders of the Hyperlapse app for Instagram, and it’s designed to make it easy to shoot and then edit video using just the camera and a phone. It’s the editing that’s probably the most impressive feature.

The camera records 360-degree video, but makes it easy for you to export a more standard-looking video by choosing which parts of the frame to focus on at any given moment.

It’s sort of like having a set of cameras pointed in every direction all the time, and then choosing which angles you want to include in the final product. You can pan from one part of the picture to another or pull up a split-screen view to show two views at once without requiring your viewer to put on a 360-degree headset.

Wired reports that the folks behind the camera had originally hoped to do everything with just software, but they couldn’t find an existing camera that met their needs so they decided to build one featuring front and back camera lenses, each with a 208 degree field of view that can be stitched together to create a single 360-degree video.

At launch, the camera is compatible with iPhones, but an Android app is on the way.

For now, this is a hardware+software solution that requires buying a camera that can record up to 60 minutes of video at a time (that’s how long the 830 mAh battery will last) before plugging the camera into a phone to edit and then share videos.

It’ll most likely appeal to the sort of folks who are already willing to drop that kind of money on an action camera or other niche device. GoPro cameras, for example, currently sell for between $150 and $700.