Today’s smartphones do a lot of the things that yesterday’s laptop computers did. You can use a phone for email, web surfing, gaming, and web browsing, among other things. But some activities, like viewing and editing documents can be easier on a device with a large display and full-sized keyboard.

Over the past few years a couple of different companies have announced plans to bridge the divide by offering a laptop dock that you can plug into your smartphone to use phone apps on a notebook-like device.

The HP Elite x3 Lap Dock is available, but it’s an expensive solution for a phone (and operating system) that’s not widely used. The crowdfunded Superbook is supposed to ship any day now, and it’s unclear when the Mirabook will ship.

If you’re looking for another option, now you have one though. 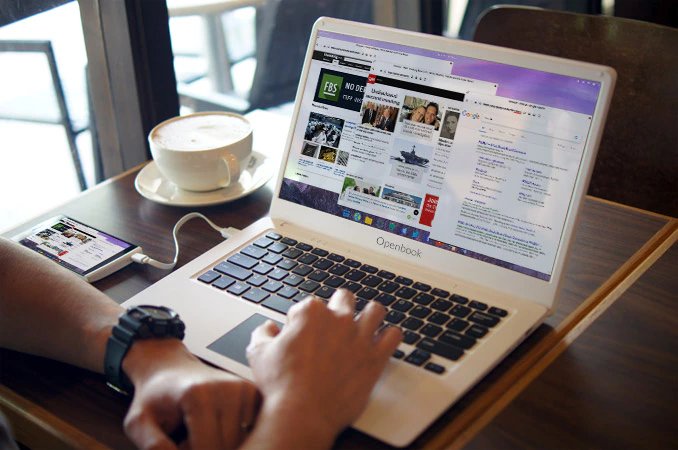 The openbook is a new 14 inch laptop shell that’s designed to connect with phones running Android 5.0 or later that have USB OTG support. Your phone plugs into the OpenBook via a USB port that supports DisplayLink technology.

The OpenBook looks like a laptop, but this 2.8 pound device is powered by your phone’s processor, memory, storage, and operating system. Load up the Leena Desktop UI Pro app from the Google Play Store, and it’ll make Android look a bit more like a desktop operating system. But basically the OpenBook is designed for running Android apps on a bigger display.

Theoretically you could also plug in any device that supports DisplayLink though, which means you could use the Openbook like a second display for a Windows, Mac, or Linux desktop or notebook, among other things.

The folks behind the crowdfunding campaign say the OpenBook should ship in December and it comes with a power adapter and USB OTG cable. The first 50 backers to pledge $109 should be able to reserve one at that price, after which the price goes up to $129.

On the one hand, there’s really not much setting the Openbook apart from similar crowdfunded gadgets like the Superbook or Mirabook… which makes me wonder how long this device will be delayed.

On the other hand, there’s actually some reason to think this one might ship on time. It’s coming from a group called “Cloud Media” which has the same parent company as Pine64, the company behind the 14 inch Pinebook Linux laptop.

In fact, the Openbook uses the same case, display, keyboard, and touchpad as the Pinebook. It just has a different motherboard. So the company has a bit of experience working with some of this hardware already.