The Motorola Moto X4 is a smartphone with strong mid-range specs including a 5.2 inch full HD display, dual rear cameras, a Qualcomm Snapdragon 630 processor, 3GB of RAM and 32GB of storage (for US models, at least).

An Android One version of the phone should be available from Google’s Project Fi network soon for $400. 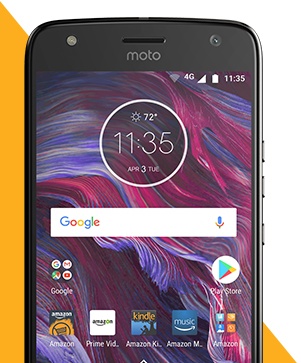 That means the phone will come with some Amazon apps pre-loaded, including one that shows ads on the lock screen. But it also means that Prime members can pick up the phone for $330 instead of $400.

The phone is compatible with all major US wireless carriers and ships with Android 7.1 Nougat software. Keep in mind that this isn’t an Android One phone like the version that Project Fi is selling, so it’ll likely come with a little more Motorola bloatware and it may take a bit longer to receive security and OS updates.

But you get the same hardware including the 12MP + 8MP rear cameras, 16MP front-facing camera with an LED flash, microSD card slot for up to 2TB of removable storage, 3,000 mAh battery, and IP68-rated water resistance.

Meanwhile, if you’re more interested in the Android One version of the Moto X4, check out the Liliputing review.