The folks behind the Banana Pi line of products have been riffing on the Raspberry Pi name and product lineup for a few years. One of the company’s newest products is a tiny computer called the Banana Pi M2 Zero.

As the name suggests, it looks a lot like the Raspberry Pi Zero W and features similar ports and functionality. But the Banana Pi M2 Zero has a much more powerful processor. It’s also about $5 more expensive.

The Banana Pi M2 Zero sells for $15 plus shipping.

Like the Raspberry Pi Zero W, this little computer has 512MB of RAM, a microSD card slot, a mini HDMI port, and built-in 802.11b/g/n WiFi and Bluetooth. It has two micro USB ports (one of which is only used for power), and a camera connector. And the computer features a 40-pin expansion header. 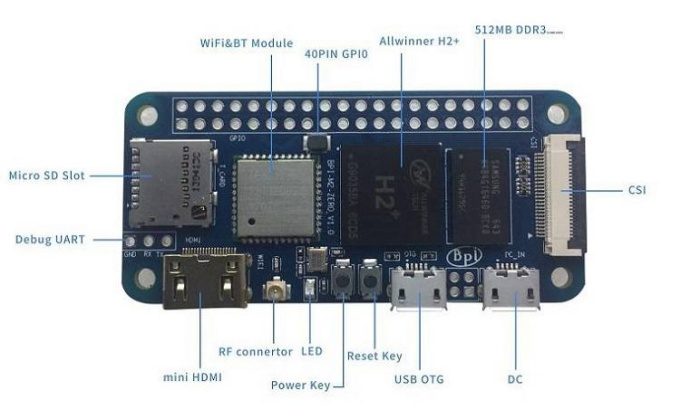 In other words, the 2.4″ x 1.2″ computer is about the same size and shape as the Raspberry Pi Zero W, but for a few bucks more you get a model that should offer significantly better performance.

On the other hand, you get less official and unofficial support, since Banana Pi products aren’t as popular and don’t have the same kind of user base as Raspberry Pi’s devices.

That said, you can already download Ubuntu 16.04 MATE for the Banana Pi M2 Zero, and it’s possible that other operating systems developed for similar hardware will run on the single-board computer.

If you’re looking for a cheap PC that you can use as a desktop computer, there are probably better options. But this could be an interesting base for a handheld game console or terminal, a smart speaker, network attached storage device, or security system, or other DIY gadget.