Mobile app stores are filled with a combination of free and paid apps and games, with many of the free titles subsidized by ads or optional in-app purchases. But so far we haven’t really seen that replicated in the brave new world of third-party apps or “skills” for smart speakers and voice interfaces.

Of course, that kind of makes you wonder why developers would bother creating skills for those platforms… and the answer has largely been to build brand awareness and maybe in hopes of an eventual payday.

Earlier this year Amazon did start a program where it would pay some top skill developers directly. And now the first Alexa skill with premium features has been launched. 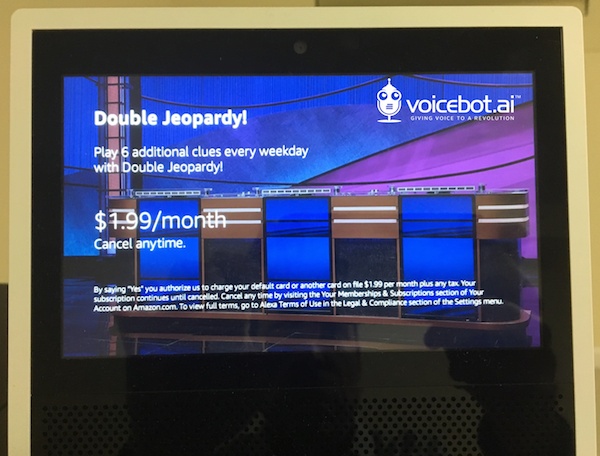 As noted by TechCrunch and Voicebot.ai, the popular Jeopardy! skill for Alexa is still free… if you just want to get 6 clues per day. But once you hit your limit, you’ll now be asked if you want to pay $1.99 per month to get another 6 clues per day.

If you sign up for the new option, called Double Jeopardy!, you can also play yesterday’s game if you missed it.

Oh, and if you’re an Amazon Prime member you don’t have to pay at all. You get access to Double Jeopardy! for no additional charge.

Amazon tells TechCrunch Jepoardy! is the first Alexa skill to use new developer tools for premium features… but that there are currently no plans to put any existing features behind a paywall. Instead the idea is to offer additional content to folks willing to pony up some cash.

That said, I have a hard time imagining why you’d want to buy an Amazon Echo, Fire TV, or other Alexa-enabled device if you weren’t already an Amazon Prime subscriber. So maybe we should just think of these additional features as more perks available with a Prime membership.