Every year chip makers release new processors that bring better performance and/or improved efficiency to smartphones. But processors are only one of the factors in smartphone performance. Another is the type of storage.

Over the past few years we’ve seen smartphone makers start to adopt UFS 2.0 and UFS 2.1 storage, which offer a big boost in read/write speeds.

Now it looks like we’re getting a bit closer to the launch of UFS 3.0, which is said to be up to twice as fast as UFS 2.1. 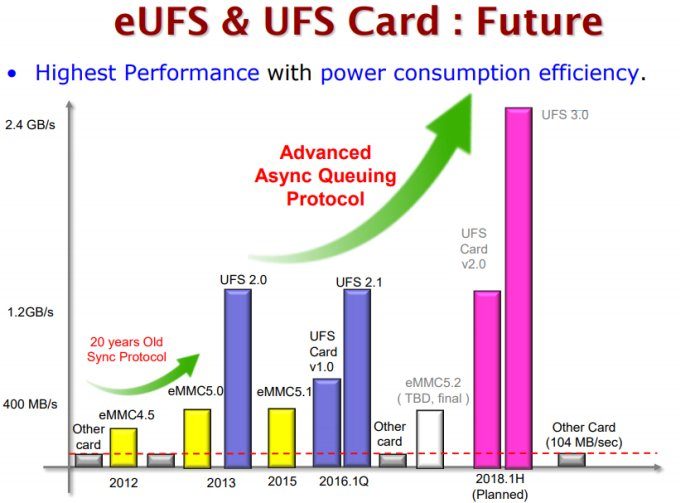 The JEDEC Solid State Technology Association expects UFS 3.0 to offer top speeds up to 2.4 GB/s, up from the 1.2 GB/s theoretical limit of UFS 2.1. The current plan is to launch the new standard in the 2nd half of 2018.

Now several Chinese and Taiwanese sites include Benchlife.info and CTimes are reporting that UFS 3.0 intellectual property licensing has begun and that Taiwanese electronics company Phison has begun working on a UFS 3.0 controller.

So it looks like the next-gen high-speed solid-state storage could be ready to ship next year, as planned. Whether we’ll start to see phones, tablets, or other devices using the new technology remains to be seen.

UFS 2.0 and 2.1 modules have been available for a while, but there are still phones that ship with slower (and cheaper) eMMC storage.