We’ve already gotten a pretty good look at the Surface Mini tablet Microsoft had planned to release in 2014, before canceling at the last minute. But now Evan Blass (@evleaks) has released some marketing materials created for the discontinued device, including a spec sheet and some rendered pictures. 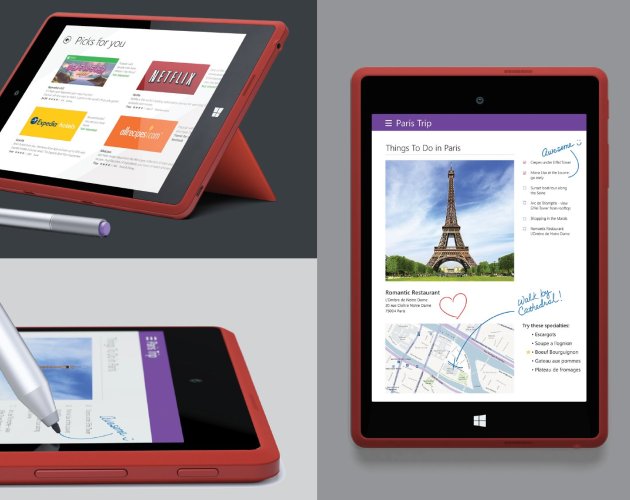 The Surface Mini was a tablet code-named “Iris.” It featured a 7.5 inch, 1440 x 1080 pixel display with a 4:3 aspect ration, 240 pixels per inch, and support for 5-point multitoch input. It also works with a pressure-sensitive Surface Pen, which was expected to come in the box with the tablet.

Unlike larger Surface tablets, which are generally designed to be used with a detachable keyboard, the Surface Mini would have been a handheld device, first and foremost. But it did have a built-in 3-position kickstand that would have allowed you to prop it up on a tablet a several different angles for watching videos, making video calls, or reading the news without holding the tablet in your hands.

The tablet measured 8″ x 5.4″ x 0.35″ and weighed about 13 ounces. Microsoft planned to offer black, red, and blue color options. And the tablet featured a capacitive Windows button and physical power and volume buttons. 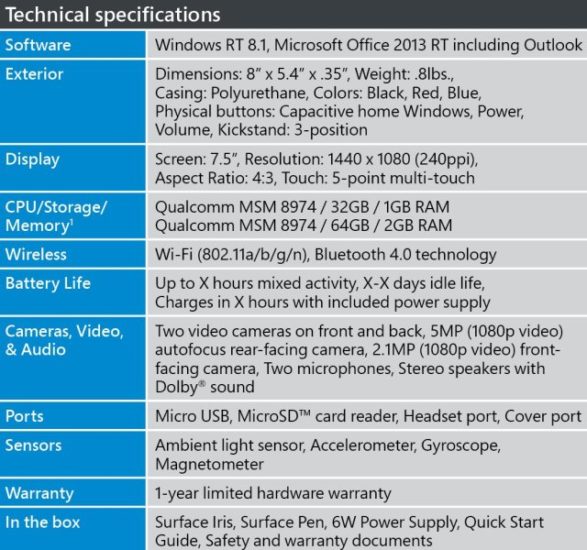 The biggest problem with the tablet is likely that it was designed to run Windows RT, a version of Windows developed to work on devices with ARM-based processors. The problem with Windows RT is that it couldn’t run legacy Windows applications developed for computers with x86 chips… which means that the Surface Mini wouldn’t have been able to run the vast majority of Windows-compatible software.

If Windows RT and/or Windows Phone had ever really caught on, maybe that wouldn’t have been a huge deal. But since developers never really embraced the platform the way they did Android and iOS, there’s a huge app gap between the Windows Store and Google and Apple’s app stores.

Maybe if Microsoft had used an Intel Atom processor for the Surface Mini, the company could have just released it with Windows 8.1 and eventually offered an upgrade path to Windows 10. But instead Microsoft opted for a Qualcomm Snapdragon 800 processor, which limited the software that would work on the tablet.

Or maybe if Microsoft has just waited a few more years. There’s a new version of Windows 10 that’s expected to run on devices with ARM-based processors, and it’s coming by the end of 2017. This time Microsoft says users will be able to run legacy Windows applications, thanks to emulation that allows x86 code to run on ARM chips, as long as their sufficiently powerful. The first Windows-on-ARM devices are expected to feature Qualcomm Snapdragon 835 processors, which are the chips that power many of this year’s highest-performance smartphones.

12 replies on “This is Microsoft’s canceled Surface Mini (@evleaks)”