HP has a complicated relationship with tablets. Instead of launching an Android tablet when those looked like the next big thing, the company acquired Palm for $1.2 billion, put out the HP TouchPad tablet with webOS software, and then promptly discontinued that tablet after initial sales numbers were disappointing.

Eventually the company did release a few Android-powered tablets. But it’s been a few years since the company launched a new model in the US, where HP is instead focusing on Windows devices including tablets, notebooks, and convertibles.

But it turns out HP hasn’t given up on Android tablets altogether. The company just launched a new model in India. 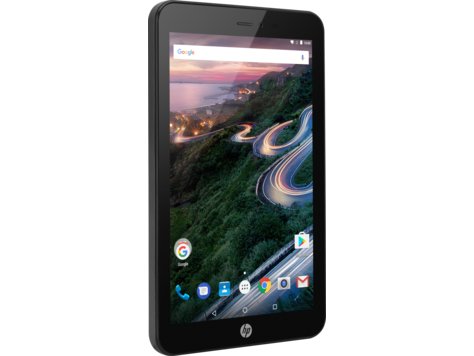 It’s called the HP Pro 8, and it’s a 4G-capable tablet that you can also use like an oversized smartphone.

The HP Pro 8 has a 5MP rear camera with autofocus and a VGA front-facing camera. It has a single 1.2 watt speaker, two microphones, and a 3.5mm headphone jack and micro USB 2.0 port. It ships with Android 6.0 Marshmallow.

HP’s tablet isn’t going to win any awards for performance, design, or state-of-the-art specs or software. But this is a tablet aimed at enterprise users, and it does have a few business-friendly features including built-in support for GSM wireless networks and a set of pogo pins on the back of the tablet that let you add “jackets” with additional features.

4 replies on “HP launches a new Android tablet… in India”