The first phone from Essential Products is a striking device, thanks to its ceramic body and a display that covers nearly all of the front of the device, with the notable exceptions of a small bottom bezel and a cut-out for the front-facing camera. The Essential Phone went on sale last month, but I got my first chance to check one out in person tonight. 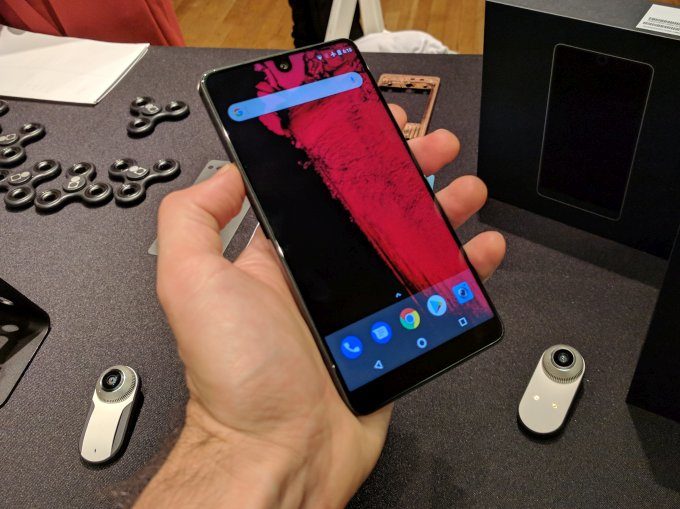 I also asked a representative about reports that Sprint has only sold about 5,000 units so far… and got a firm “no comment.” But while Sprint is the only carrier selling the Essential PH-1, the company does also sell an unlocked version of the phone that works on any US wireless network. And given that this phone is really designed to appeal to smartphone enthusiasts, I suspect most potential customers would probably be more interested in that version anyway.

The phone I got a chance to play with was running close-to-stock Android software, but it was also close-to-just-set-up software, so I didn’t get a chance to try many apps.

But I did find the camera cut-out less annoying than I’d expected… mostly because a black bar shows up when you’re using most apps on the phone, so you don’t even really notice the cut-out. Instead if looks like the phone grows a bezel when you’re surfing the web or using the phone for activities such as playing games or watching movies.

Of course, that sort of makes me wonder why Essential didn’t just release a phone with a slim top bezel that covers the camera… but it’s possible we could come to see some apps embrace the cut-out and wrap around it. That’s what already happens on the home screen and app launcher, giving you a little more screen real estate by moving the status bar up next to the camera instead of below it, for example.

The phone feels very solid and well-constructed, but there is a downside to the ceramic back. It’s a fingerprint magnet. The representatives at the Essential booth have a cloth to rub down the phone pretty much every time someone puts it down.

I spent a few minutes playing with the black model, but I’m told fingerprints are less noticeable on the upcoming white version.

The other thing that makes this phone stand out are the two little pins on the back that you can use to attach modules like a 360-degree camera, which is the first (and currently only) module available. The Essential Phone sells for $700 on its own, or $750 when you buy it with the camera.

Bringing the camera close to the pins on the back of the phone is good enough for the magnets to do their job and pull the two gadgets together and lock things in place. An LED lights up on the camera to let you know it’s connected, and a few seconds later a 360-degree camera app opens on the phone automatically.

Essential is already working on additional modules, including a laser scanner and a “high-end audio accessory” with a 3.5mm audio jack (the phone doesn’t have one built-in).

We could probably see more modular accessories in the future… if Essential manages to sell enough phones to make continued development worthwhile. For now, the company isn’t really saying anything about sales numbers.