E Ink’s display technology is often found in eReaders and sometimes used in digital signage and other items, like smartphones and laptops. But a few years ago the company introduced a new large format solution called Prism that was designed for architecture and design projects.

Now E Ink has announced that the San Diego International Aiport and design firm Ueberall have deployed the “first large-scale deployment of E Ink’s Prism technology that will be accessible to the public view.”

The project is called DAZZLE, and it consists of more than 2,000 E Ink Prism display panels have been placed around the airport’s new rental car center to create an interactive mural along the 1,600 foot long facade. 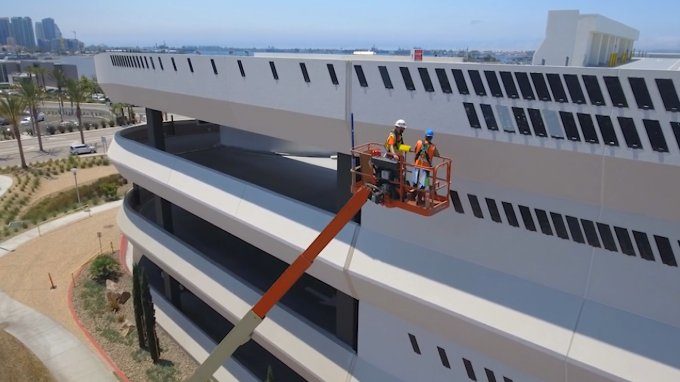 Each tile includes an electronic paper display and a wireless transmitter, allowing a central host computer to program the changing visual effects that play out on the screens. And each tile has its own integrated solar cell for power.

Like the E Ink displays used in eBook readers, the display tiles are reflective, which means they’re visible in sunlight without any additional illumination. And they’re low-power, since they can display a static image indefinitely and only consume electricity when the image being displayed is changed.

What does this mean for the future of the screen technology used in Kindle and NOOK devices? Not much, really. But it does show that the company behind that technology has another revenue stream.