Don’t feel like spending $1199 on your next convertible Chromebook? Asus has got you covered.

After unveiling the Chromebook Flip C101 in May, the company is bringing its new convertible Chromebook with a 10 inch touchscreen display and a 360 degree hinge to the United States.

The Chromebook Flip C101 is up for pre-order from Amazon and the Asus Store for $299, and it’s expected to begin shipping September 25th. 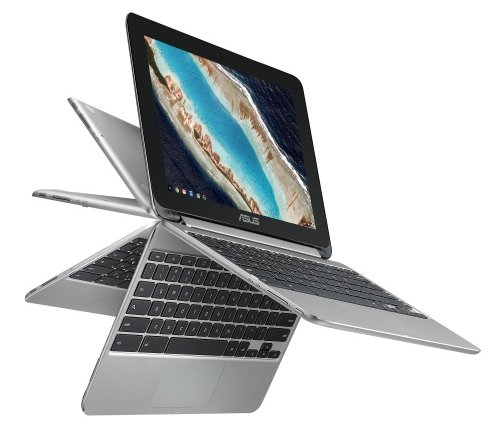 If the notebook looks familiar, that’s because it’s nearly identical to the Asus Chromebook Flip C100 which launched in 2015. But it has one important difference: the new model features a Rockchip RK3399 hexa-core processor with two ARM Cortex-A72 CPU cores and 4 Cortex-A53 cores, which is a big upgrade from the older model, which had an RK3288 chip with four Cortex-A17 CPU cores.

Like its predecessor, the new Chromebook Flip features a 10.1 inch, 1280 x 800 pixel display and the model up for pre-order features 4GB of RAM and 16GB of storage.

Asus says the laptop’s 38 Wh battery should be good for up to 9 hours of run time, and the Chromebook Flip C101 has an HD webcam and an all-metal body.

The Chromebook Flip C101 measures about 0.6 inches thick and weighs about 2 pounds, making it a bit heavy for a tablet, but pretty light for a notebook. One of my favorite things about the Chromebook Flip C100 was how natural it felt to move back and forth between laptop and tablet mode. I could use it for some light work in laptop orientation, then flip back the screen to read news articles or comic books in tablet mode… something that feels a lot less natural on heavier tablets with larger screens.

While it would have been nice if Asus had chosen to offer a model with a higher resolution display, I suppose folks who want a more powerful model with a better display can opt for the pricier Asus Chromebook Flip C302, which features an Intel Core M processor, a 12.5 inch full HD display, and a list price of $499 and up.