Just a few months after introducing the last new variant of Windows 10, Microsoft is at it again. This fall the company will release Windows 10 Pro for Workstations, which is designed for high-end computers.

It supports server-grade hardware including Intel Xeon and AMD Opteron processors with up to four CPUs and up to 6TB of memory. And it includes file system, memory, and file sharing enhancements.

Windows 10 Pro for Workstations will be available when the Windows 10 Fall Creators Update launches later this year. 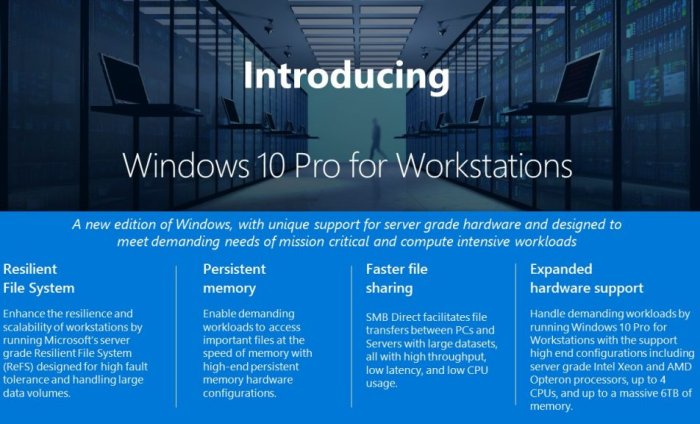 Some of the other new features in this version of Windows 10 include support for ReFS (Resilient file system), which had originally been designed for Windows server, a new SMB Direct file sharing feature, and support for NVDIMM-N non-volatile memory.

If this all sounds kind of familiar, that’s because we saw a leaked presentation slide about the upcoming operating system in June.

On the one hand, it sounds like Microsoft is further fragmenting Windows 10. The company already offers 5 different versions of the operating system, and by this fall the number will be up to 6:

On the other hand, it’s not like most home (or even business) users need support for multi-CPU computers, 6TB of memory, or other features included in Windows 10 Pro for Workstations. So it kind of makes sense to leave them out of Windows 10 Pro and charge customers who do need those features a premium price.