High-end cinema camera maker RED plans to launch a smartphone in 2018. But the upcoming RED Hydrogen One isn’t just a phone. It’s also a modular device that’s expected to have a high-quality camera and support for add-ons including lens mounts and sensors that can extend the functionality of the phone.

The RED Hydrogen ONE is up for pre-order for $1,195 and up, which makes it pretty expensive for a smartphone. But it’ll be one of RED’s cheapest cameras and according to video blogger Marques Brownlee, it’s expected to have features that’ll offer DSLR-like photography in a smartphone-sized device.

And Brownlee’s in a pretty good position to know that: he recently met with RED and got a chance to check out some of the company’s prototypes. 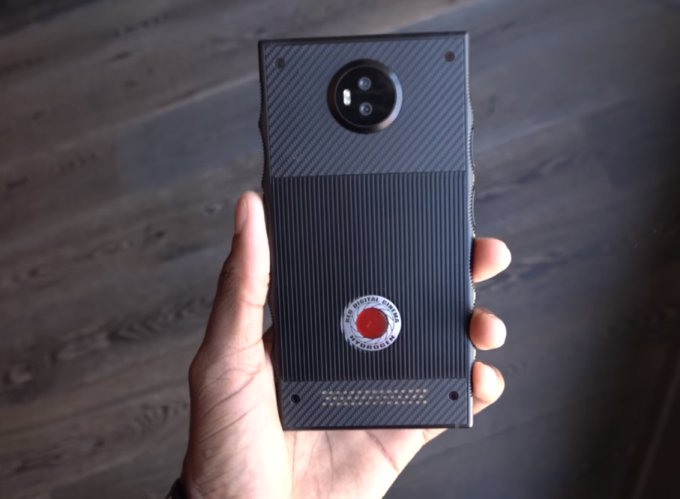 Right now the company has a few different prototypes, including one that shows pretty much what the phone will look like when it’s finished, a working model in a non-final body that shows off the device’s “holographic display,” and a third prototype that shows how the modular system works.

Brownlee spent most of his time going over the “fit and finish” prototype, which showcases the tri-panel design of the back of the phone, with a metal middle and kevlar covering the top and bottom, as well as the ports and buttons. There’s a USB Type-C port and headphone jack, a power button that also works as a fingerprint sensor, and stereo front-facing speakers.

The RED Hydrogen ONE features a 5.7 inch display which can be used as a traditional 2D screen. But there’s also a “holographic” option that allows you to view 3D content without using glasses. We don’t know much about how that will work yet, but a similar feature wasn’t enough to save Amazon’s ill-fated Fire Phone.

RED created an unusual notched pattern on the side of the phone, which may make the Hydrogen One less slippery to hold than some phones. And there are dedicated buttons for snapping photos and recording videos.

The camera section of the prototype is pretty much a placeholder for now: it’s unclear what the final version will look like. But the pins on the phone will let you attach lenses and other accessories to enhance the camera features. It’s unclear if RED plans to follow Motorola’s lead and also allow snap-on modules that offer other features such as battery packs, speakers, or projectors.

Brownlee says RED plans to unveil another prototype with both the near-final design and a working holographic display within the next month or two.