At least that’s the idea, and when the company showed off prototypes to journalists earlier this year, they seemed reasonably impressed.

Now the makers of the ReMarkable tablet say they’re getting ready to ship the first batch of devices, with 11,000 units set to go out to customers who have placed pre-orders starting August 29th. 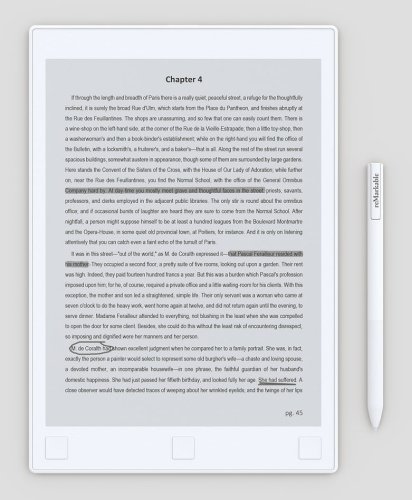 The current version of the slate went up for pre-order over 9 months ago for $379. The pre-order price is now up to $479, but that money buys you the slate, the “Marker” digital pen, and a folio case. Once the pre-order special is over, the full price for the tablet alone is expected to go up to $529 (or $716 for the bundle… plus another $29 for shipping).

The tablet features an 1872 x 1404 pixel E Ink Carta display with 226 pixels per inch. It supports multi-point capacitive touch input (meaning you can use multiple fingers at once), as well as the digital pen. And since the screen is plastic, there’s no breakable glass.

ReMarkable says the pen supports tilt detection and low latency (the goal, as of a few months ago, was to get the latency down to 55 ms). Ad the pen does not require any batteries.

The tablet has 8GB of built-in storage, 512MB of RAM, a 1 GHz ARM Cortex-A9 processor, and a Linux-based oeprating system called Codex. There’s a 3,000 mAH battery and a micro USB port for charging.

At launch, the tablet supports PDF and ePUB files, but additional formats could be supported in the future.

If you just need a device for reading eBooks, this tablet is clearly overkill. It’s really the pen input that makes it special, by letting you jot notes, draw pictures, highlight or annotate books, or do whatever else it is people with decent handwriting or artistic ability do with pens (I’m not really one of those people, so I have a limited idea of how useful this feature is).

But that does make me wonder why ReMarkable would even bother listing the price of a tablet without a pen. I can’t imagine anyone who’d be interested in one without the other.