Smartphone cameras have gotten better and better over the past few years, allowing you to take some pretty amazing photos or even shoot feature films using just a smartphone.

But these days smartphone cameras do a lot more than simply let you capture still photos and moving pictures. Cameras can help your device sense depth, letting you use your phone as a virtual measuring tape or mapping system. They can be used for facial recognition, or iris scanning, offering an alternative to fingerprint sensors for biometric security.

All of those things are already possible, but chip maker Qualcomm wants in on the action. So along with unveiling a second-generation Spectra ISP (image signal processor) technology for devices with Qualcomm Snapdragon chips, the company is introducing three new camera modules designed for phones and/or head-mounted displays (HMDs). 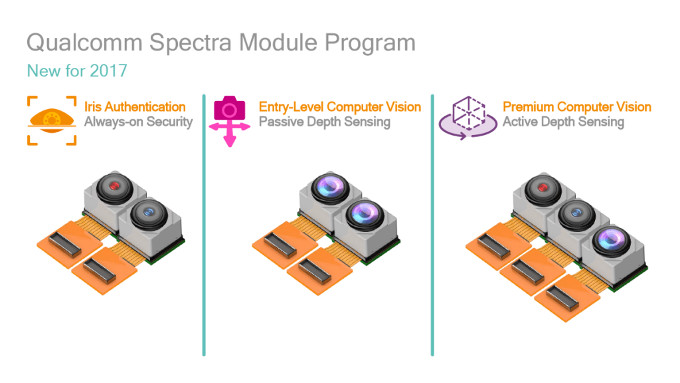 First up is a new iris authentication module, which is said to be able to recognize a face in less than 40 milliseconds.

Qualcomm is also introducing a passive depth sensing module and an active one. The active one features an IR camera and an RGB camera and the system can work in the dark.

The passive depth-sensing module is cheaper and more energy efficient, but less precise.

Among other things, Qualcomm says the technology should allow for augmented reality experiences (think Google’s Tango or Apple’s ARKit) as well a hand-tracking and motion tracking for VR headsets with 6-degrees of freedom.

While the new camera tech will be built into Qualcomm’s next-gen Snapdragon Mobile Platform chips, it could take a while for Android and other mobile operating systems to be updated with support for Qualcomm’s 2nd-gen Spectra ISP, so don’t expect to see this new tech hit the streets until next year at the earliest.