Netflix held its latest Hack Day recently, giving the company’s employees some space to build new projects that reimagine the way we interact with the streaming video service.

The company’s been holding Netflix Hack Days for years, and while teams of engineers have come up with some really cool ideas, the goal is really to celebrate teamwork and creativity rather than to create consumer-facing products.

Nonetheless, I wouldn’t mind seeing some of this year’s hacks made public. 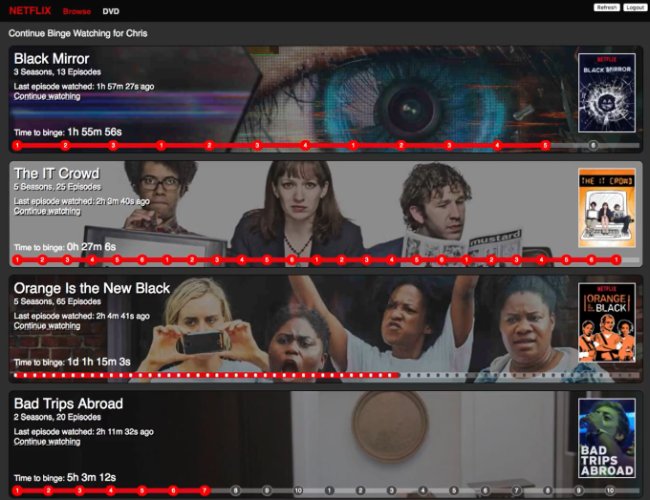 For example, there’s the “Continue Binge Watching” feature, which provides at-a-glance information letting you know how far through a TV series you’ve gotten so far and how many hours (or days) it would take to finish the series.

Netflix Audiobook Mode is a very cool idea that that uses audio descriptions that are already available for many shows (as an accessibility feature for visually impaired users), and effectively turns TV shows into audiobooks by featuring dialog and sound effects, as well as narrated descriptions of the action.

Some hacks are cool, but less useful. Spookyflix, for example, makes the eyes of characters shown in the Netflix user interface seem to follow your mouse cursor or remote control. Teleflix lets you control Netflix using Morse code. And a Netflix Vending Machine lets customers pay for a subscription by inserting cash at a vending machine and then scanning a QR code on their phone to link that payment to their account.

Actually, that last one seems cumbersome… but it could be an interesting solution for markets where smartphones are common, but credit cards are not.