Intel Optane memory is a new type of speedy, non-volatile solid state storage that can be used like an SSD… except that for now it’s way more expensive. So Intel’s first consumer versions of Optane memory are small modules meant to offer speedy cache performance when used alongside a larger hard drive or SSD.

And now Intel is bundling Optane memory with some of its NUC mini computers. Earlier this year the company launched a line of NUC PC kits with 7th-gen Intel Core “Kaby Lake” processors, and now there three versions that come with Optane memory pre-installed. 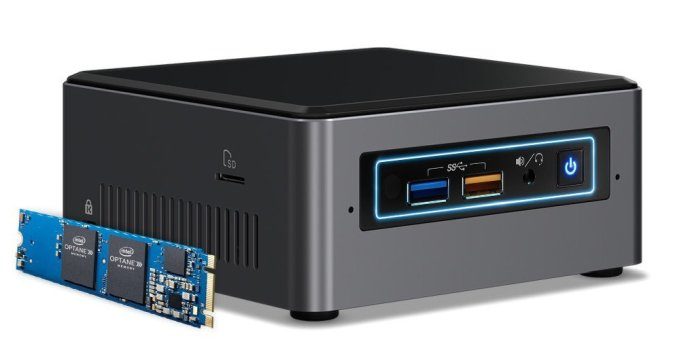 While the system does have a processor and some storage, it’s still basically a barebones machine. You’ll need to add RAM, additional storage, and an operating system.

Amazon is currently selling the Core i3 + Optane model for $339.

Intel’s BOXNUC7I5BNHX1 NUC Kit also has Optane memory, but this model, which Amazon sells for $421 packs more punch thanks to an Intel Core i5-7260U processor with Intel Iris Plus 640 graphics and a Thunderbolt 3 port, where the Core i3 model has a USB 3.1 Type-C port.

Of course, now that Intel’s Kaby Lake NUC kits have been on the market, it might be cheaper to buy one on sale and add Optane storage on your own. A 16GB module sells for $49, and a 32GB version is $80.

Note that not all Intel NUC kits officially support Optane Memory. But the NUC7i3BNH, NUC7i5BNH, and NUC7i7BNH that were released earlier this year should all work.

I also wouldn’t be surprised if Intel eventually released updated NUC kits with quad-core, 8th-gen Kaby Lake Refresh chips. But the company hasn’t made any announcements along those lines yet.