Augmented Reality has been around for almost as long as smartphone cameras have existed. An app called Layar allowed you to point your phone at real-world objects and see virtual signs overlayed on them in real-time way back in 2009.

But things have really started to get good in the past few years. Google’s Tango technology allows Android phones with special cameras to make precise measurements and create 3D maps of real-world environments for gaming, home decorating, and other tasks.

And this year Apple launched ARKit, bringing some pretty impressive augmented reality features to phones that don’t have any special cameras.

So now that Google wants to compete… and there are only two phones that support Tango on the market, the company is followuing suit with its own augmented reality SDK called ARCore. 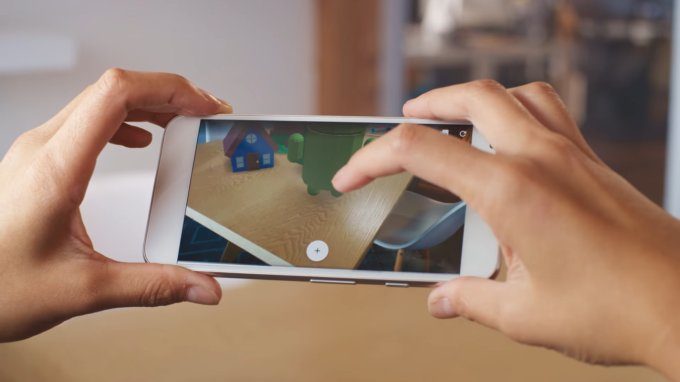 An ARCore preview SDK is available to developers starting today, and unlike Tango, apps developed with ARCore will be able to run on existing phones with single or dual-camera systems.

Initially that means the Google Pixel, Pixel XL, and Samsung Galaxy S8 as long as they’re running Android 7.0 or later. Eventually Google plans to add support for other phones from Samsung, Huawei, LG, and Asus, among others. The goal is to bring ARCore support to “100 million devices at the end of the preview.”

ARCore may not offer the same kind of precision you get with Tango. But it uses your phone’s hardware to track motion, measure ambient light, and recognize some objects such as horizontal surfaces.

That lets you do things like place a virtual object on top of a real table or desk and then move around that flat surface and view the item from different angles.

So what does this mean for the future of Tango? Google’s not killing that project entirely, at least not yet. But it’s about to become a niche technology for those interested in the few things that Tango can do that ARCore can’t… like depth sensing. But eventually we may see Tango-like features including IR projectors and sensors added to mainstream phones.

In other words, ARCore is already built on technology developed for Tango… but it’s designed to work with the hardware you’ve probably already got in your phone. And if it catches on, phone makers may add some hardware that had previously been Tango-specific to future devices to make ARCore more powerful.