Dell is giving its Inspiron line of 13 inch, 15 inch, and 17 inch notebooks a Kaby Lake-R update. As usual, the models I’m most interested in are the most portable, including the Dell Inspiron 7000 laptop with a 13 inch display and the 13 inch Inspiron 7000 convertible with a 360-degree hinge and a touchscreen display.

Both are getting a modest makeover to go along with their new CPUs. 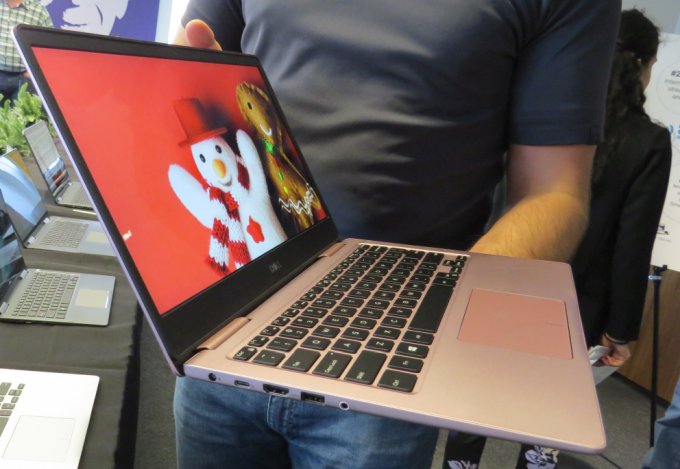 Dell’s new 13 inch clamshell-style laptop features Intel Kaby Lake Refresh quad-core processor options, a full HD IPS display, a hinge that lets the screen fold back almost 180 degrees so that it lies nearly flat against the same surface as the keyboard, and slimmer bezels on the left and right side of the screen (but there’s still a bit of top bezel, allowing Dell to put a camera above the screen rather than below it — which is where it’s still found on the company’s XPS 13 laptop).

While the clamshell version of the notebook lacks a touchscreen display or infrared camera, it does have one thing that the convertible-style version does not: a fingerprint reader to the right of the keyboard.

One thing I should point out is that while the model pictured in this article is pink, Dell currently only plans to offer that color option in Asia. For now the only color expected to be available in the US is silver.

Prices are expected to begin at $800 when the laptop goes on sale starting October 3rd.

And yes, I know I refer to the 8th-gen Core chips as “Coffee Lake” in the video below, even though they’re actually “Kaby Lake Refresh.” I was caught a little off guard, since I received a briefing from Dell before Intel officially announced the names for its new chips.