Dell unveiled an unusual PC accessory called Dell Canvas at the Consumer Electronics Show in January. It’s a 27 inch display that support pen, touch, and dial inputs, giving you a new way to interact with a PC when creating artwork or graphics, editing videos, or performing other activities.

Now you Dell Canvas is available for purchase from Dell.com. 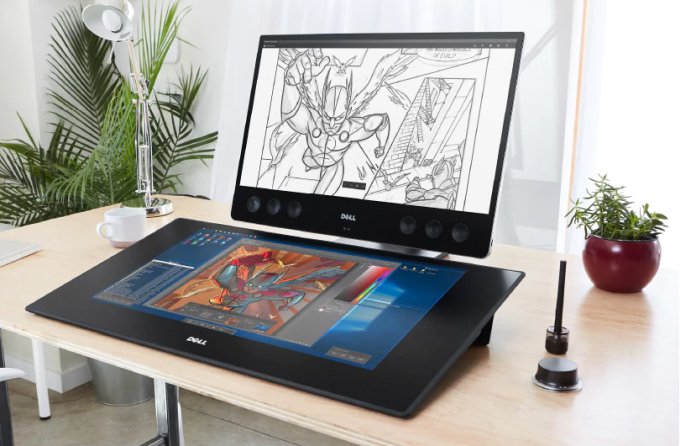 While Dell Canvas is a 27 inch, 2560 x 1440 pixel display, it’s not meant to be used as your primary display. Instead you can connect it and another display to your PC and use Canvas as both a second screen and an input device.

It supports 20-point multitouch input, works with a pressure sensitive pen that magnetically sticks to the bezel when you’re not using it, and features an LCD panel that’s directly bonded to Corning Gorilla Glass to help make the pen-and-glass experience a bit more like writing or drawing on paper.

It has mini HDMI, mini DisplayPort, and USB Type-C inputs for connecting to a computer, as well as USB Type-C, USB 3.0 Type-A, and 3.5mm headphone jacks.

Dell is timing the release of its Canvas device to the start of this week’s SIGGRAPH conference, where the company is also launching three new Precision workstation tower PCs, a new Precision 7920 Rack computer, and a special Anniversary Edition of the Precision 5520 mobile workstation laptop.

Basically the anniversary edition is just like the normal version, except it has “an exclusive hard anodized aluminum, brushed metal finish in a brand new Abyss color with anti-finger print coating.”