Now the company is getting ready to launch a new convertible model called the Nitro 5 Spin. But it’ll have one of Intel’s new Kaby Lake-R chips.

The move from 7th to 8th-gen Intel Core processor technology means that you still get a processor with 4 cores and 8 threads, but the new laptop will have a 15 watt processor instead of 45. Acer says that means you should get up to 10 hours of battery life from the Acer Nitro 5 Spin. 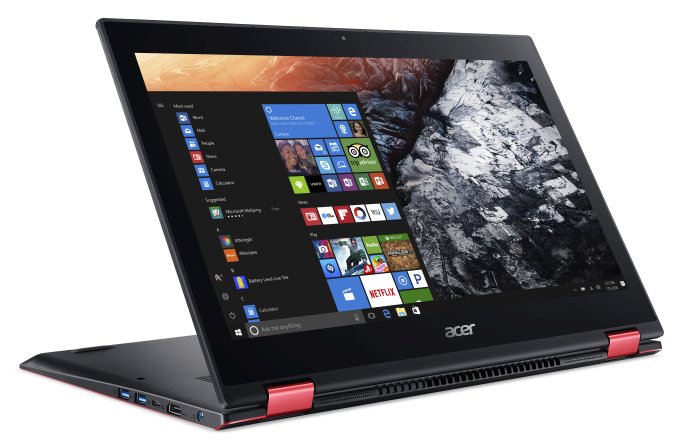 By comparison, the Nitro 5 Laptop with a Core i5-7700HQ processor gets up to 7 hours of battery life (or less while gaming).

The upcoming Nitro 5 Spin has a 15.6 inch full HD IPS touchscreen display, a 360-degree hinge that lets you use the laptop in tent, tablet, or notebook modes, stereo front-facing speakers with a subwoofer, and a backlit keyboard.

Acer will offer models with up to a Core i7 processor, and up to 512GB of PCIe solid state storage. And the new model has the same GeForce GTX 1050 graphics as the current Nitro 5 laptops.

Acer describes this as a laptop for “casual gaming” rather than one for hardcore gamers. It doesn’t have the most powerful graphics card, and while a Core i7-8550U processor is a big step up from a Core i7-7500U in terms of performance, it’s only really better than a Core i7-7700HQ when it comes to efficiency and battery life.