Microsoft realizes you probably don’t have a Windows smartphone. But you do probably have a phone… and probably wouldn’t mind it working a bit more seamlessly with your Windows PC.

So the company promised that the upcoming Windows 10 Fall Creators Update would include some cross-device features that let you do things like pick up on your PC where you left off on your Android phone.

Now the company is rolling out a preview build of Windows 10 with some of those features included… and they’re not quite as seamless as I’d expected. But that’s what happens when Microsoft controls the operating system you’re using on your laptop or desktop PC, but not the OS you’re using on your phone. 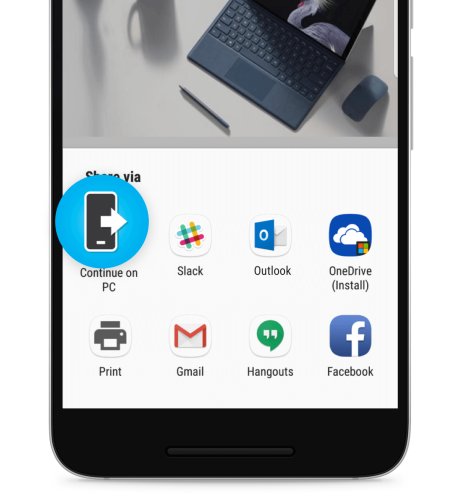 For example, if you’re reading a web page on your phone and want to view the same page on your desktop, you can use a new “continue on PC” option. But in order to do that, you need to open the native Android sharing menu on your phone and choose the “continue on PC” item and then decide whether to “continue now” (which will open the page immediately on your desktop) or “continue later,” which will add a notification to the Windows Action Center.

Basically, this isn’t all that different than what you’d do if you wanted to email a link to a website to yourself.

Oh, and before you can do any of that, you need to “link” your Android phone to your PC by going into the Windows settings, choosing the option to link your phone so that an SMS is sent to your Android device prompting you to download and install an app… seamless, right?

Anyway, that’s still probably one of the most exciting new features in Windows Insider Preview Build 16251 for PC.