Want to remove an app you’ve installed on a recent Amazon Fire or Fire HD tablet? All you need to do is long-press the app icon on your home screen, then tap the “uninstall option” that appears at the top of the screen after you release your finger.

But what about apps that come pre-installed on the tablet? That’s a little trickier. But it turns out there is a way to remove pre-installed apps. It doesn’t even require rooting your device.

I’ve tested this method on the 2017 Amazon Fire HD 8 tablet, but it should also work with recent 7 inch Fire tablets.

Update: The method described below works with tablets running Amazon’s Fire OS 5.4.0.0 or earlier. But it does not work with Fire OS 5.4.0.1 or later.

For more up-to-date information on Fire Tablet hacks, check out this article: 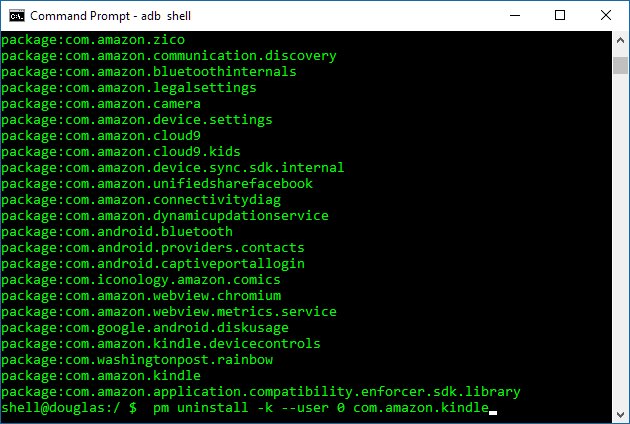 As noted by xda-developers forum member DragonFire1024, all you need to do is connect your tablet to a computer with a USB cable, set up adb (Android Debug Bridge), and then run a couple of quick commands in a terminal window on your Windows, Mac, or Linux computer.

The first thing you need to do is enable developer options on your tablet and then enable adb connections. . Here’s how to do that: 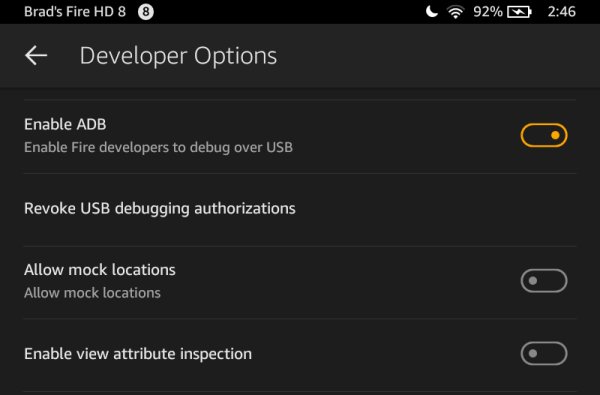 If you’ve already set up the Android SDK or some other application that includes the Android Debug Bridge, you may be ready to go. But if not, you’ll want to download the latest Android Platform Tools for your operating system and unzip them to a folder on your device.

Once that’s done, you can plug your Fire tablet into your computer with a USB cable.

Next, open a terminal window (on a Windows computer you can do this by typing “cmd” into the Start Menu search bar) and navigate to the folder you just created.

Now, type “adb devices” into the terminal window and hit enter. If this is your first time doing this, the ADB daemon should start and an alert should pop up on your tablet screen. You’ll have to approve the connection before you can continue.

Once that’s done, you should see a list of connected devices in the terminal window. 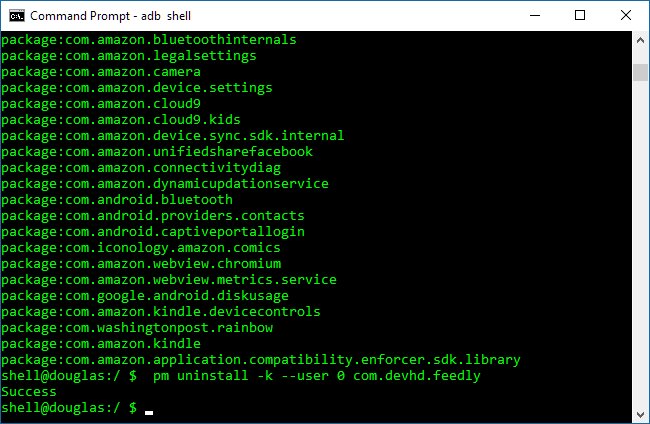 Theoretically you could use this method to remove any of the software you don’t like on the Fire tablet, including the home screen/launcher, the Amazon appstore, and yes… Amazon’s “special offers” feature that places ads on the home screen and in the nofication area unless you pay $15 to remove the ads.

You will need to know the name of the app you want to uninstall. And uninstalling some applications could cause your Fire tablet to stop functioning as expected.

For example, some users have noticed that after installing a third-party launcher and uninstalling the Fire launcher, the home button does not work.

The good news is that if anything goes wrong you should be able to reinstall apps using related adb shell commands. Just use the install command instead of uninstall.

And if things get totally messed up, you can perform a factory reset. The method described above removes apps from the user portion of your Fire tablet’s storage.

It does not affect the system partition. So restoring your tablet to its factory condition will bring back any apps you’ve removed (although it’ll also overwrite other data, so this is probably a last resort option for most people).

30 replies on “How to uninstall any app from an Amazon Fire (or Fire HD) tablet, no root required”