As they generally go, leakers got the jump on Motorola and gave us a fairly detailed idea of what the Moto Z2 Force would look like. Now that it’s been officially announced, it looks like the leaks were right on the money. 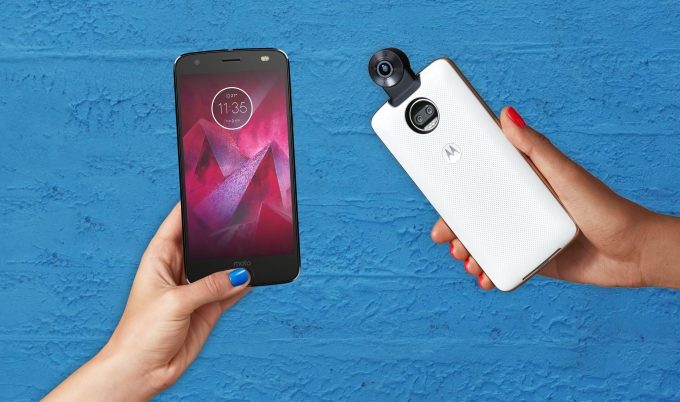 On the back of the aluminum-clad Z2 Force there’s a fingerprint sensor to simplify authentication. Perched above it are dual cameras with 12MP sensors and there’s a 5 MP ƒ/2.2 camera on the front for snapping selfies. The phone’s 5.5-inch quad HD display is guaranteed not to shatter, so expect to see a flood of YouTube videos putting that claim to the test very soon.

Like the other members of the Moto Z line-up, the Z2 Force is compatible with all MotoMods.

The Z2 Force’s battery’s gotten quite a bit smaller, down to 2730mAh from the first-gen’s 3500mAh. Motorola says it still provides enough juice for a full day of use and the Z2 Force did get much thinner and lighter. Motorola managed to shave almost a full millimeter off the profile (it’s 6.1mm thick) and drop 20 grams (to 143g). They also ditched the 3.5mm headphone jack, which means you’ll need to plug in the included USB-C adapter if you want to use your existing wired headphones.

Motorola is offering the Z2 Force in three colors. Take your pick from Super Black, Fine Gold, and Lunar Grey — which is a Verizon exclusive. The Z2 Force will ship with Android 7.1.1 on board, but a quick upgrade to Android O is promised. You can pre-order one now for $799 directly from Motorola and it starts shipping on August 10. Get in early and Motorola will ship you a free Insta-Share Projector mod, too.