You may not be able to root the 2017 models of the $50 Amazon Fire 7 tablet or the $80 Amazon Fire HD 8. But you don’t need root access to install the Play Store or even to replace the home screen launcher (sort of).

Here’s how to add a bit of Google to an Amazon tablet. Note that these instructions were tested with an Amazon Fire HD 8 (2017) running Fire OS 5.4. But it’s my understanding that the steps are nearly identical for the Fire 7 (2017) and for devices running Fire OS 5.3.

The first step is the easiest. Swipe down from the top of the screen to bring up the Quick Settings panel, then choose the Settings icon. 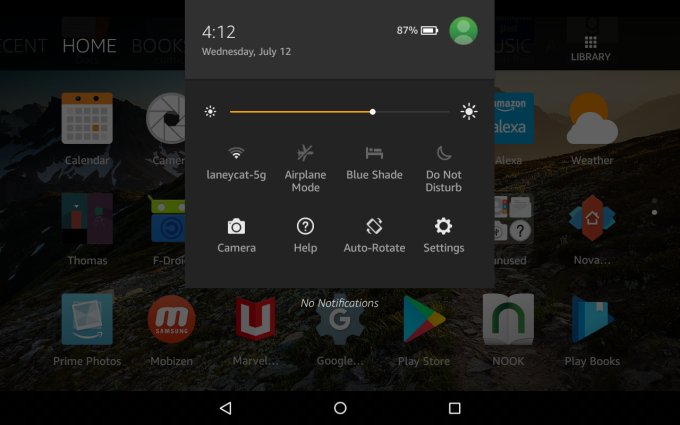 Scroll down until you see an option called Security and tap it.

In the Advanced section, tap the item that says “Apps from Unknown Sources” and then click “OK.” 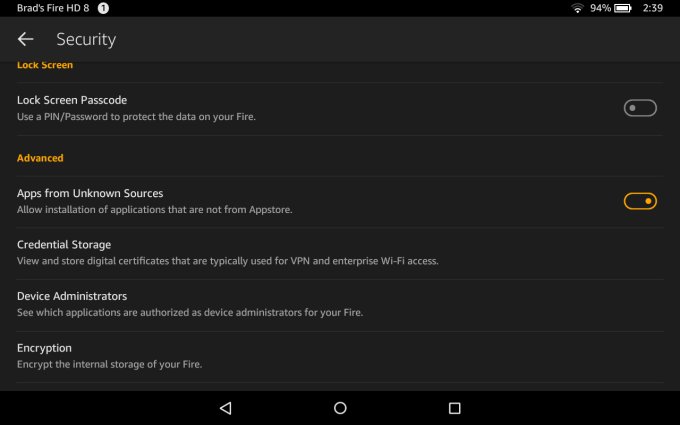 Keep in mind that enabling installation of apps from unknown sources does make it a bit easier to accidentally install malware on your device. So make sure that any apps you do install come from sources you trust.

At this point you could just start grabbing apps from APKMirror, F-Droid, or other third-party app stores. For example, I installed the Nova launcher app, the Solid Explorer file browser, and the Mobizen screen recorder before proceeding to the next step.

Note: If you’re using a tablet running Fire OS 5.6.0 and the “install” button is grayed out when you try to load an app from an unknown source, there’s a simple workaround: hit the power button to turn off the display and then hit it again to turn the screen on again. This should make the install button turn orange.

Updated note: Amazon rolled out an update in early December, 2017 that fixes the grayed-out install button problem. The workaround shouldn’t be necessary if you’re running the updated version Fire OS 5.6.

Now for the good stuff. In order to install most apps, you only need to download and install a single APK file. But it takes 4 apps for the Play Store to work.

Fortunately, xda-developers forum member Gilly10 has put together a list of the 4 APKs you need.

A few things to keep in mind: you may be downloading old versions of some of these apps, but don’t worry. Once they’re installed they’ll automatically update in the background. And keep an eye out for any notes about specific devices: for example, there’s a different Google Play Services APK recommended for my tablet (the 7th-gen Fire HD 8) than for other tablets.

You also need to install all 4 APKs in order, and then reboot your device before Google Play Services will work properly.

One way to do that is to open the xda-developers forum link in the Silk browser on your device, follow the links to the 4 files and download them and install them one-by-one. Just tap the appropriate download link, then click “open” and then “install” for each one.

Or you can download all four and then open them from the Downloads section of the Silk browser or by using a third-party file explorer app like Solid Explorer. Just make sure you install them in the correct order.

Once all four apps are installed, reboot your device and then login with your Google account. If you’ve used the Play Store on another device in the past you should be able to access any apps, games, media, or subscriptions linked to your account. 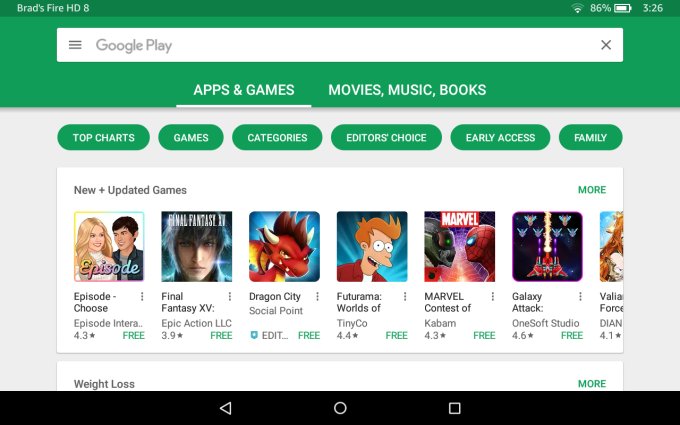 Note that these steps will only install the Google Play Store, Play Services, and Settings apps. But once those are loaded you can install a bunch of apps that are not available from the Amazon Appstore including Play Books, YouTube, and Play Movies & TV.

I even installed the B&N NOOK app, just for kicks. 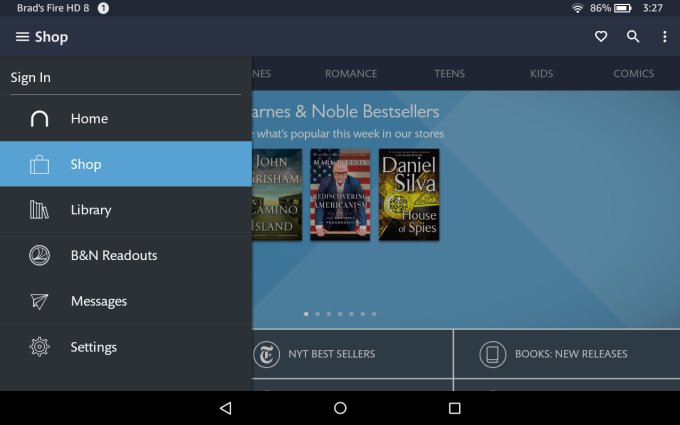 While you can install a third-party launcher without taking this step, any time you want to open it you’ll have to actually locate the app in the Amazon home screen and launch it manually. Pressing the home button takes you back to the Amazon launcher.

What Launcher Hijack does is redirect you to the launcher of your choice, although you do have to trust that the developer of this app isn’t harvesting your data, because the method for hijacking a home button press is a bit intrusive.

you don’t actually need to install the Play Store for this step, but I’ve put it last because I suspect most people will want to load the Play Store first. At the very least it makes it easier to find third-party launchers.

Anyway, once installation of apps from unknown sources is enabled, you can download the latest version of Launcher Hijack from the link posted by the developer at the xda-developers forum.

Just click that link in the Silk web browser on your tablet, download the APK, and then click “open” once you get a notification saying the file has been downloaded.

Tap the “Install” button on the following screen, and once that’s complete, select open. 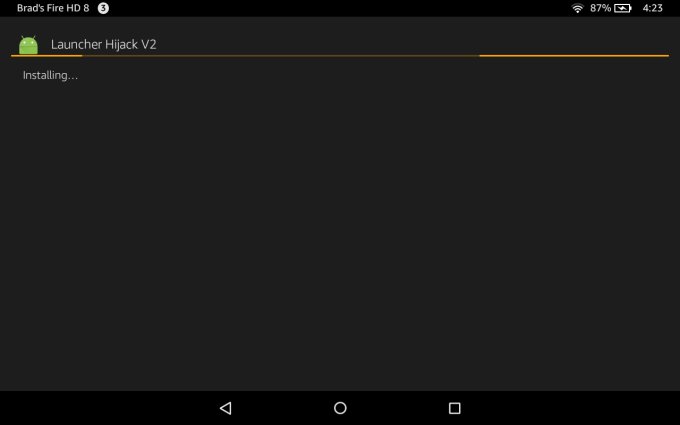 Assuming you’ve already installed a launcher, you should see it listed in the following screen. Choose your preferred default. But there’s one more step to take until the app can hijack a home button press. 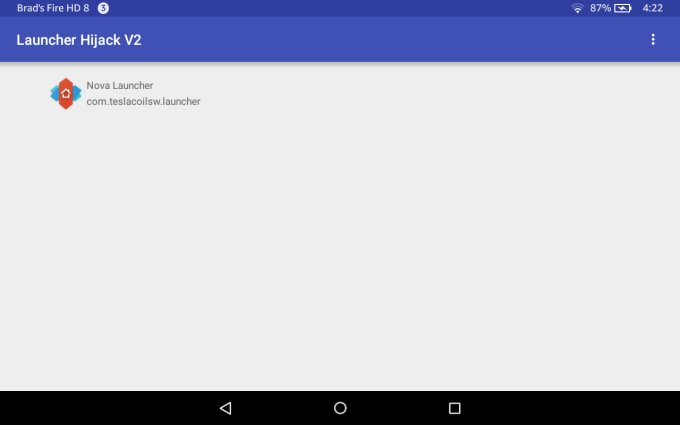 Go back to your device settings and scroll down until you find the Accessibility section. Scroll down to the bottom and you should see an option that says “To detect home button press.” This needs to be turned on before Launcher Hijack can do its magic. 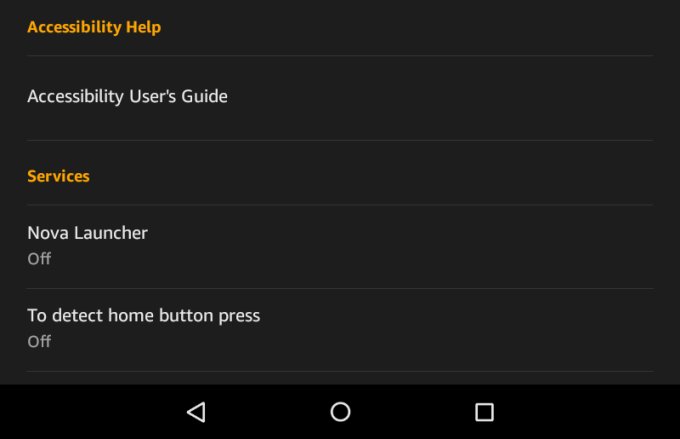 Note that Amazon does warn that enabling this option will allow the app to detect anything you type, except for passwords. So proceed with caution. Personally I’ve decided for now that I’d rather live with the stock launcher app than give a third-party app that kind of access to my data. But depending on how you plan to use the tablet, you may make a different choice. 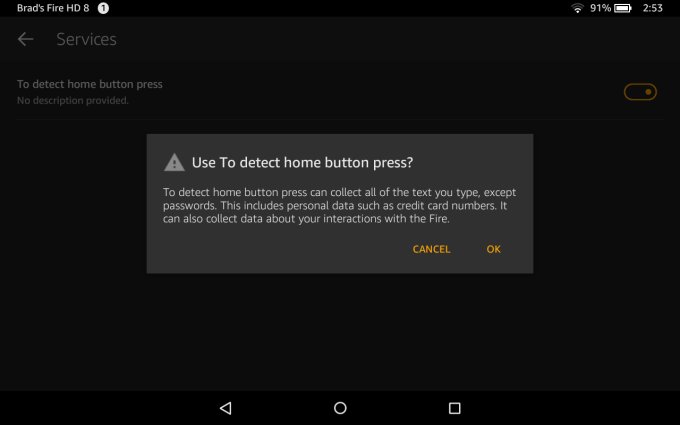 Once you’ve toggled that option, any time you press the home button you’ll see the stock Fire OS home screen for a brief second before your preferred third-party option opens.

It’s not a perfect solution, but it works without root access.

With the Play Store installed and a third-party home screen enabled, the Fire HD 8 starts to feel a lot more like a typical Android tablet… albeit one with all the features you’d normally get with a Fire including support for text-to-speech, access to Amazon’s music, video, and book stores (and the Amazon Shopping app), and rather robust set of options for using an SD card.

Not bad for a line of tablets with prices starting at $50 (or sometimes less).