Net Neutrality is the idea that internet service providers (ISPs) and governments should treat all internet data equally. Customers shouldn’t be required to pay more for access to some websites than other, and ISPs shouldn’t be able to block you from visiting sites run by a competitor.

Generally speaking, the thinking is that it would have been difficult for Facebook, Google, or Netflix to have become what they are today if ISPs could have just blocked access or charged additional fees. And now it’d be tough for new competitors to get started if Google, Facebook, or Netflix work out deals with ISPs so that their services run faster than their competitors.

While the US government is backing away from net neutrality rules proposed during the Obama administration, thousands of websites and other organizations are participating in a net neutrality “day of action” today to raise awareness and urge action.

And then there’s Virgin Media. 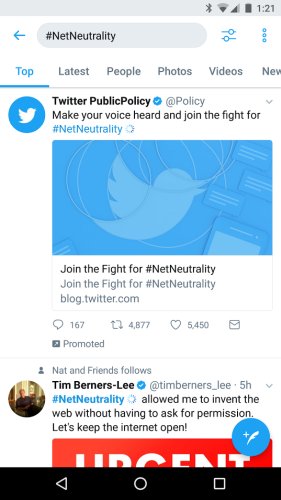 This week the UK wireless carrier announced that its 4G mobile customers can now use Twitter as much as they want without that usage counting against their data cap.

Twitter is just the latest service Virgin customers can access without using up their mobile data: Facebook Messenger and WhatsApp usage were covered in an earlier update.

Virgin Media’s not alone in doing this sort of thing. In the United States, T-Mobile’s BingeOn and Free Music Streaming features let customers stream media from select internet music and video services without that data counting against their monthly data caps.

All of these perks sound pretty good for users: pay for 5GB of data and you can stream all the media you want, or spend as much time on social media or messaging services as you want without worrying that you’ll run out of data.

But the point is that there’s nothing stopping Virgin or T-Mobile from deciding that the only services you can access are the ones that pay for access… which could make it tough for startups hoping to be the next WhatsApp or YouTube if they can’t afford to pay those fees.

via EFF, The Verge, and Engadget