According to AMD, Ryzen 3 processors are up to $20 cheaper than their Core i3 Kaby lake counterparts, and offer up to 29 percent better performance.

But while you should always take self-reported benchmarks with a grain of salt, there are a few nifty things about AMD’s 65-watt Ryzen 3 chips that could make them pretty interesting. 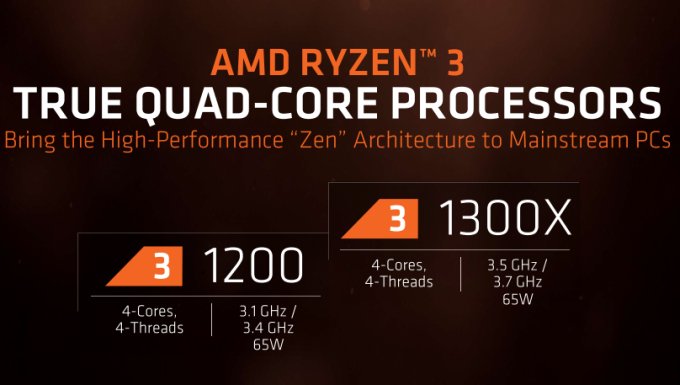 First up, the Ryzen 3-1200 and Ryzen 3-1300X are both multiplier unlocked, which means enthusiasts can try to overclock them to improve performance.

Second, while Intel’s Core i3-7100 and Core i3-7300 chips are dual-core chips with support for hyperthreading to offer 4 threads, the AMD Ryzen 3 chips are 4-core/4-thread chips. While there’s no hyperthreading, you get four physical CPU cores instead of two.

What does that mean in terms of real-world performance? According to AnandTech’s tests, the Ryzen 3 1300X seems to be very competitive with Intel’s Core i3 Kaby Lake desktop chips when it comes to price and performance. The Ryzen 3 1200 is a bit less compelling. But it’s still kind of impressive that AMD managed to design its Zen architecture so that it scales from entry-level chips like these all the way up to Threadripper 16-core chips and Epyc server processors.

AMD says all of its Ryzen chips are compatible with the Oculus Rift virtual reality headset, with Ryzen 3 chips (and the Ryzen 5-1400) described as “VR-ready,” while Ryzen 5-1500X and faster processors are “VR-ready Premium.”

One thing to keep in mind about these chips is that like all other Ryzen chips to date is that they do not have integrated graphics. So if you’re looking for an entry-level chip with AMD Radeon graphics built in, AMD is continuing to push its A-Series and Athlon X4 chips.