You’ve seen plenty of smartphones launch with massive batteries. How many have you seen launch with no battery whatsoever? Apart from NoPhone, which is really just a black plastic slab, probably none.

Without a battery, most phones would be pretty much useless. Not the prototype developed by researchers at the University of Washington, however. It’s still capable of making calls even when there’s no battery attached. That’s because the UW Battery-Free Cellphone draws power from the air rather than lithium cells. 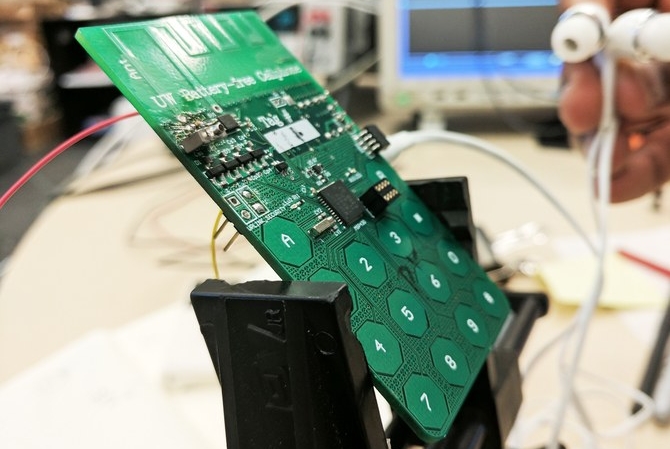 Specifically, it converts radio waves of a specific frequency into power. Not a lot of power, mind you, but the phone’s energy needs have been kept to a minimum. There’s no display, just a single red LED that provides visual feedback. The cellphone doesn’t make calls using a traditional cellular radio, either.

Instead it uses backscatter, a technique that enables ultra-low-power communication by reflecting inbound radio signals. One of the phone’s other power-saving features: analog speech isn’t converted to a digital signal. As U of W Research associate Vamsi Talla told Wired, “if you can communicate using analog technology, you’re actually more power efficient.”

There are a few hurdles that need to be overcome before a Battery-free Cellphone is ready to hit store shelves. While it doesn’t depend on a battery for power, it does need a base station withing 15 meters to pump out the required radio waves. It also works more like a walkie-talkie or CB radio right now. You have to press a button to talk and then release it to listen, and there’s a fair amount of static during calls.

The next iteration of the device will be quite a bit more advanced. Call quality should be greatly improved, and Talla says it will feature an E-Ink display and possibly even a camera.