Qualcomm is probably best known for making the chips that power smartphones, but the company has also been developing fingerprint sensors for a while.

The company’s latest drop the Sense ID name and are just called Qualcomm Fingerprint Sensors. And along with the no-nonsense name come features designed for modern smartphone hardware.

For example, there’s support for under-glass sensors that can be placed beneath a phone’s display, allowing you to login to your device just by tapping a spot on the screen. 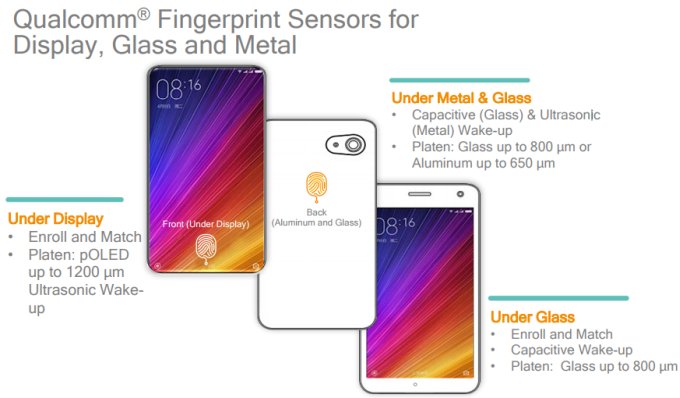 Qualcomm says its new fingerprint sensors include options that work with display, glass, and metal, allowing device makers to put the sensors below a phone’s display, on the back of the phone, or beneath the screen.

Wondering how it can pick up your fingerprint through your phone’s screen? It’s because the sensor are ultrasonic, meaning they use sound waves that can penetrate glass and metal… as long as the glass or metal isn’t too thick.

Another nifty feature: the fingerprint sensors support IP68 waterproof devices and can be used even when you’re underwater.

Vivo and Qualcomm are showing off a modified version of the Vivo X6 Play smartphone using the new Qualcomm Fingerprint Sensor for Display technology at Mobile World Congress Shanghai this week… which helps explain that video of an unannounced Vivo phone with an under-glass fingerprint sensor we saw recently.

6 replies on “Qualcomm’s new Fingerprint sensors work under glass, under displays, and underwater”