It’s been a few years since Amazon launched its first Echo smart speaker, and now Google has its own version. Apple’s is coming soon. And Microsoft is working with HP and other companies to launch smart speakers that use its software.

That could just be the tip of the iceberg.

Chip maker Qualcomm has launched a new platform designed to make it easier for companies to built smart speakers. 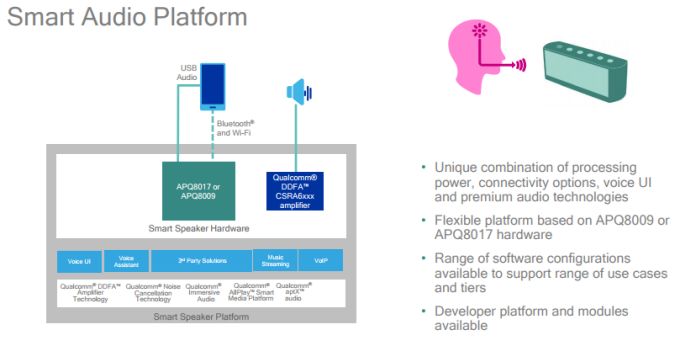 The platform includes either a Qualcomm APQ8009 or APQ8017 processor, support for far-field voice technology (so that you can talk to your speaker from across the room) with noise suppression and echo-cancellation features, and support for multi-device speaker setups.

That means you can use synchronize music playing on several speakers in the same room or set up your speakers in different rooms with each speaker playing a different song.

Qualcomm’s solution isn’t one-size-fits-all: in addition to choosing between application processors, customers can opt for different wireless chips and select from a range of different software solutions including Linux or Android Things-based operating systems.

The platform will support both Google Assistant and Amazon Alexa voice service later this year, as well as Google Cast for Audio. And there’s support for a range of audio codecs including MP3, AAC, FLAC, WAV, and OggVorbis.

While Qualcomm is probably best known for making chips used in smartphones, the company has been making a major play for the Internet of Things space. The smart speaker platform announcement comes just two weeks after Qualcomm unveiled a reference design and platform for mesh networking devices.

The company is also launching a new set of solutions for wireless speakers and headphones.