As expected, Qualcomm’s new Snapdragon 450 chip is about to bring a huge performance boost to mid-range smartphones.

The new chip offers is a 14nm processor that offers higher clock speeds than the 28nm Snapdragon 435 processor that launched just a few months ago. But it should also offer better graphics and video playback performance, faster data transfers, and longer battery life, among other things. 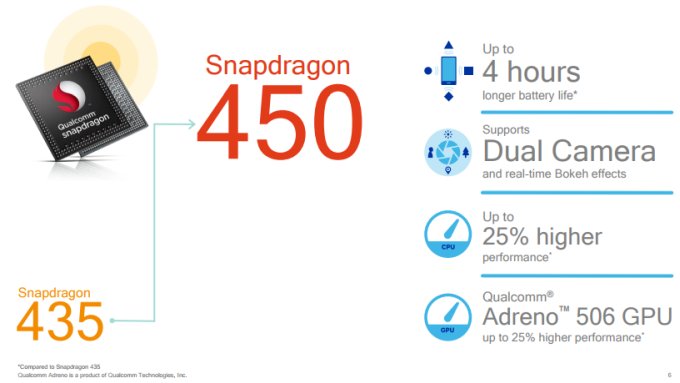 But the new cores run at speeds up to 1.8 GHz instead of 1.4 GHz. And the move to 14nm improved efficiency. Qualcomm claims that means you should get up to 25 percent better performance while using up to 30 percent less power while gaming, enabling as much as 4 hours of extra battery life, all other things being equal.

Qualcomm has also upgraded the graphics from Adreno 505 to Adreno 506, providing up to a 25 percent improvement in graphics as well.

That last one is interesting, since it’s the first time a Snapdragon 400-series chip enabled support for phones with dual rear cameras that can blur the background of an image while keeping the foreground in focus as you snap a picture (rather than applying a software effect after the image is already captured).

Phones powered by the Snapdragon 450 processor should hit the market in the fourth quarter of the year.