Smartphones keep getting more powerful, but batteries… don’t. Some phone makers get around this by cramming enormous batteries into their devices. But that leads to thicker/heavier devices, which is why some phone makers opt for smaller batteries.

Another option is to include fast charging tech so that when you inevitably have to plug in your phone before the end of the day, you won’t have to plug it in for very long.

Qualcomm’s Quick Charge solution is one of the most popular options… at least for phones with Qualcomm Snapdragon chips. And now Quick Charge is even faster than before. 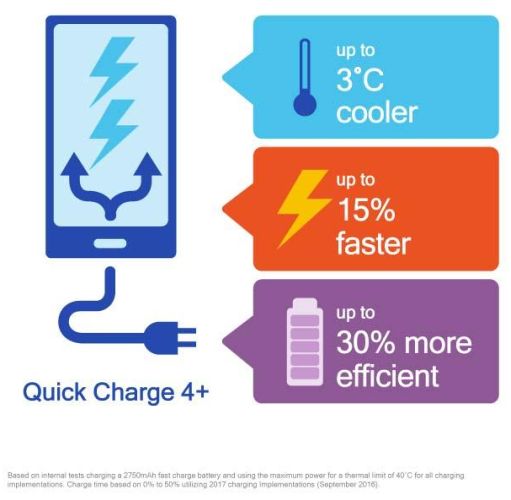 The chip maker is launching Quick Charge 4+ and says that new solution lets you charge a device up to 15 percent faster.

It’s also said to be 30 percent more efficient than Quick Charge 4, while also running at a lower temperature.

Device makers will need to implement some new hardware features including intelligent thermal balancing, dual charge, and new safety features in order to enable Quick Charge 4+. That means you probably won’t see the new tech come to old phones via a software update. But since it doesn’t require a brand new chipset, it should be possible for device makers to implement the new tech on upcoming devices pretty quickly.

In fact, Qualcomm says the first quick Charge 4+ device has already been announced: The Nubia Z17 smartphone features a Snapdragon 835 processor, up to 8GB of RAM, and QC 4+ support.

2 replies on “Qualcomm introduces QuickCharge 4+ for even faster charging”