One of the more surprising (and geeky) features Microsoft introduced with the launch of Windows 10 was something called Windows Subsystem for Linux (WSL). Basically, it’s a tool that lets you run a Linux-based operating system such as Ubuntu within Windows. Up until now the only way to do that was to enable Developer Mode from the Windows settings.

But starting with the new Windows 10 preview build that launched this week, you don’t need to toggle Developer Mode to use WSL. 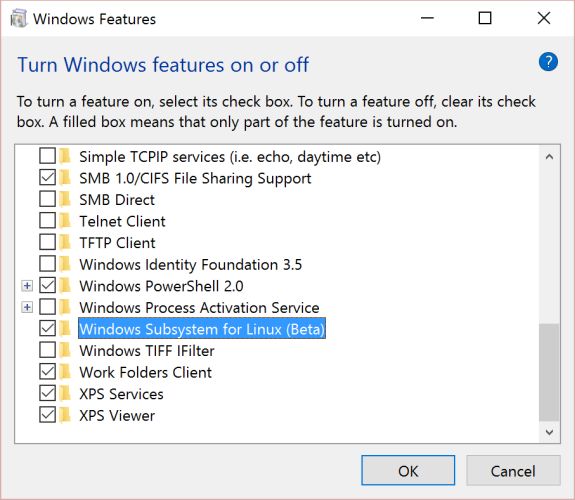 To be clear, the feature is still pretty much aimed at developers. Microsoft only officially supports running Linux in a command-line environment, although some users have figured out how to enable apps that have a graphical user interface to run (and some have even gotten full desktop environments to work).

The idea is to let developers run the command-line tools they’re familiar with straight from Windows, so they don’t have to switch computers or operating systems to go back and forth between Linux and Windows tools.

But Microsoft officials say that they’re confident WSL is stable enough to take off the training wheels.

Since it’s still a feature most Windows 10 users probably don’t want or need, it’s still turned off by default. But you can enable WSL by checking the box for “Windows Subsystem for Linux (Beta”) in the “Turn Windows features on or off” menu.

In addition to making it a little easier for anyone to give Linux-on-Windows a try, Microsoft will soon broaden the list of supported Linux-based operating systems to include SUSE and Fedora as well as Ubuntu.