Google’s next smartphone may follow in the footsteps of the LG G6 and Samsung Galaxy S8 by shipping with a display featuring an aspect ratio of roughly 2:1 rather than the 16:9 ratio that’s been more common in the past.

While Google hasn’t made any announcements about its 2nd-gen Pixel smartphones, an unannounced device called the Google Pixel XL2 showed up at the GFXBench website recently, and it’s described as featuring a 5.6 inch, 2560 x 1312 pixel display. 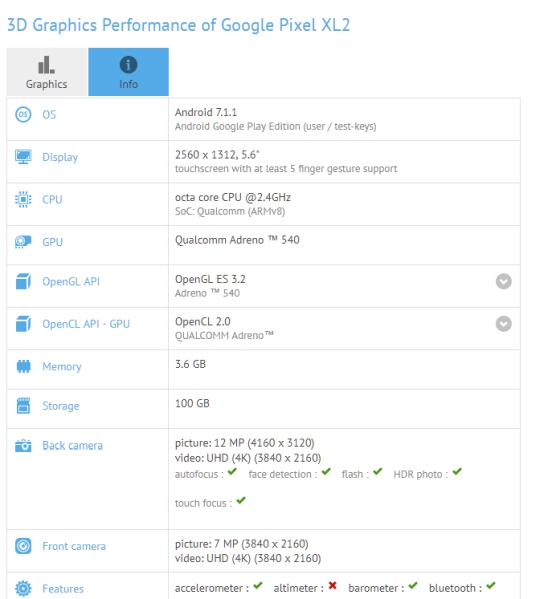 It’s worth noting that GFXBench listings sometimes get the screen size wrong, and the resolution may be off by a few pixels. But it certainly seems like we’re looking at the specs for a device with a screen wide enough to display two apps in identically sized side-by-side windows.

Other hardware is said to include a Qualcomm Snapdragon 835 processor, 4GB of RAM, 128GB of storage, a 12MP rear camera with support for shooting 4K video, and a 7MP front-facing camera that can also capture 4K video.

There’s no word on the launch date or price, but Google has a habit of launching new hardware in the fall.

It’s also likely that the Pixel XL2 is just one of the company’s new phones. There wouldn’t be much need for the “XL” in the name if this wasn’t the larger of at least two different models.