Windows phones may have a nearly insignificant market share at this point, but Microsoft’s Windows software still dominates the desktop and notebook PC space.

So while it seems likely that Android and iOS will continue to rule the smartphone space for a while, Microsoft may be planning for a future where the things we call smartphones don’t really exist anymore.

The company’s Continuum for phone software already makes it possible to use some phones as if they were desktop computers (with limited functionality). Upcoming updates will make Continuum even more versatile. And leaked details coming out of China suggest that Microsoft’s next mobile phone will be designed to further blur the lines between phones and PCs. 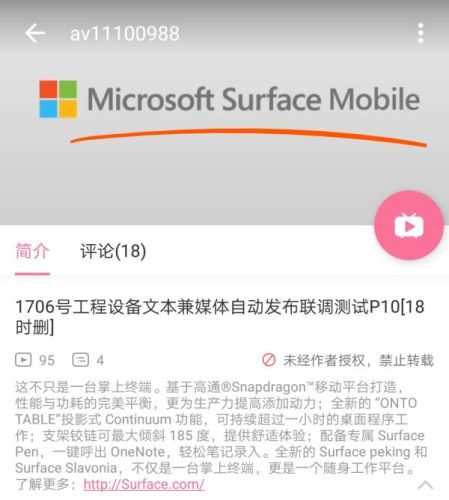 As noted by WalkingCat, information about a new “Surface Mobile” device was posted to Microsoft’s account on the Bilibili account.

The device is said to feature a Qualcomm Snpadragon processor, a kickstand, pen support, and a projector that can be used to turn any surface into an external display.

In other words, you don’t need to plug in an external monitor to use the phone as a desktop. All you need to do is turn on the projector (and maybe pair a wireless keyboard and mouse if you don’t want to use the screen for input).

With Microsoft and Qualcomm working together on a version of Windows 10 that runs on ARM chips and fully supports both Win32 apps and Universal Windows Platform apps, this could really be a phone that functions like a desktop computer… at least for a little while. You’re only expected to be able to use the projector for about an hour at a time. It’s not clear if that’s due to performance, battery life, or some other issue.

It’s unclear if that’ll be enough to tempt people who are currently using two devices: a phone and a PC. If you’re already using an Android phone and a Windows laptop, you may not feel the need to buy a phone that has a more limited selection of apps, or a notebook-replacement that has a relatively slow processor.

But you have to crawl before you walk, and the Surface Mobile could be the first step toward a future where phones really do have enough power to be the only PC you need… and if enough people buy devices that fit that description, it could give developers a reason to start bringing more phone-friendly apps to Windows as well.

via Phone Arena and On MSFT

One reply on “Microsoft Surface Mobile: A Windows phone with pen and projector?”