IDC has been tracking shipments of wearable gadgets including fitness trackers and smartwatches for the past few years. And for much of that time, Fitbit has been at the top of the list, shipping more devices than any other company in this space.

But that trend has been changing in recent years, with Chinese device maker Xiaomi catching up to Fitbit in shipments of activity trackers, and sales of the Apple Watch smartwatch picking up.

Now IDC says Fitbit has fallen to third place when it comes to wearable shipments. But does this portend the death of fitness trackers and/or Fitbit? Not quite. 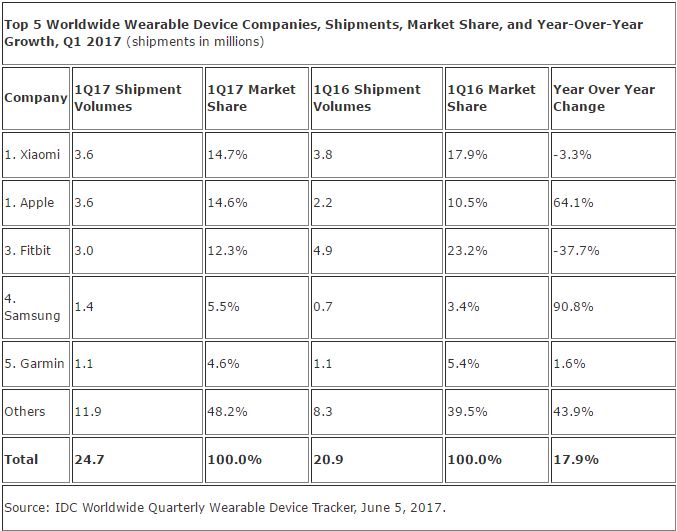 On the one hand, Apple saw a big jump in both shipments and market share between the first quarter of 2016 and the same period in 2017, while Fitbit saw a drop in both.

But IDC notes that Fitbit already has a user base of 50 million people. It’s likely that once you have a Fitbit you don’t feel the need to upgrade to a new model very often, so you’d expect shipments to slow down at some point as the market start to become saturated.

Rising Apple Watch shipments do suggest that more people are buying multifunction wearables like smartwatches rather than single-purpose devices like activity trackers… except Xiaomi, Fitbit, and Garmin still have 3 of the top 5 spots, suggesting there’s still plenty of demand for fitness-oriented devices.

Samsung is in 4th place, and did see a big jump in year-over-year growth. But you know who’s not represented on this list at all? A single company that sells smartwatches that run Google’s Android Wear software. So I’m a little skeptical that we can conclude there’s rising demand for smartwatches in general so much as that there’s rising demand for watches from the world’s two dominant smartphone makers.

That said, Fitbit is expected to launch its own smartwatch at some point. So if there really is a move to new types of wearables, maybe Fitbit will be able to stay competitive.