GPD ran a crowdfunding campaign for the tiny computer earlier this year, but if you didn’t get a chance to pledge (or didn’t want to spend money on a device that wouldn’t ship for months), now it’s up for pre-order order from GeekBuying.

The GPD Pocket sells for $496 and should ship in about two weeks. 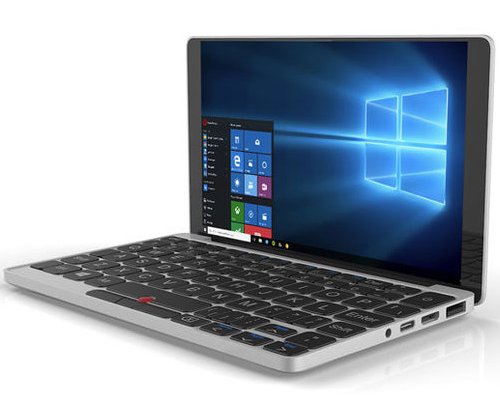 It measures about 7.1″ x 4.2″ x 0.7″ and weighs about 1.1 pounds. Despite the computer’s low-power processor, there is a small fan inside the case to help keep the system from overheating.

While there’s a QWERTY keyboard, the keys are a bit smaller than those on a typical laptop. And instead of a touchpad, there’s a pointing stick and two buttons for moving a mouse cursor.

The GPD Pocket comes from the same company that produces the GPD Win handheld Windows gaming PC. The new model swaps out the dedicated gaming buttons for a larger keyboard and display, making it more of a tiny laptop and less of a mobile game system.

But like the GPD Win, the new GPD Pocket features full Windows 10 software and a quad-core Intel processor that should be good enough for basic computing tasks.

I haven’t had a chance to test the GPD Pocket yet, but a few YouTubers have posted hands-on videos showing a bit of what the tiny laptop can do. Generally the performance seems to be pretty good, but the keyboard is a weird size that makes it hard to type with all your fingers or with just your thumbs.