As promised, the Kodak Ektra smartphone is now available for purchase in the US. And it turns out the phone is cheaper than expected: you can pick up an unlocked model for $400 and use it with a T-Mobile or AT&T SIM card. The phone is not compatible with Sprint or Verizon.

The Android phone is manufactured by Bullitt Group, which licenses the Kodak brand name. But as you’d expect from a phone with that name, the camera is front and center… or rather, back and center. When viewed from the rear, the Ektra actually looks more like a camera than a phone.

But that’s probably just about the most distinctive thing about the Kodak Ektra. 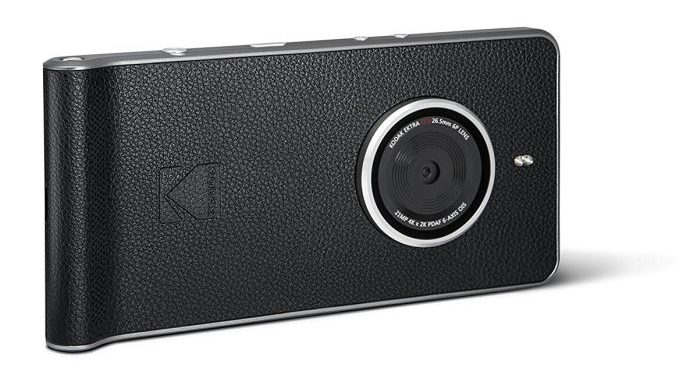 The phone has a fake leather finish, a bump at one end that gives you something to grip while snapping photos, and a larger camera bump than you probably need, although it helps drive home the point that this is a Kodak device.

The phone has a 21MP rear camera that uses a Sony IMX230 image sensor and the camera app lets you manually adjust the shutter speed, ISO, light balance, and focus. You can also snap HDR photos or shoot 4K video.

At a time when phones like the Samsung Galaxy S8, Google Pixel, and HTC U11 all earn high marks for their photographic capabilities, the key thing setting this phone apart is probably that it looks like a camera.

The Kodak Ektra features the kind of specs you’d expect to find on a mid-range Chinese phone, including a 5 inch, 1920 x 1080 pixel display, 3GB of RAM, 32GB of storage, and a MediaTek Helio X20 deca-core processor.

It has a USB 3.0 Tpe-C port, a microSD card slot, and a 3.5mm headphone jack. And the phone features a 3,000 mAh battery with fast charging support.